Is My Name David or Dayveed? 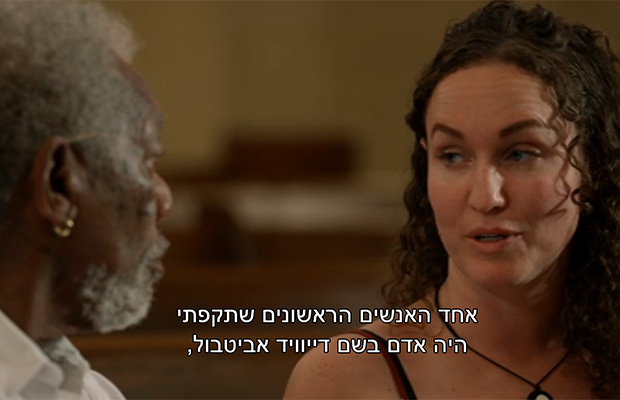 One of the cool things about the whole Westboro Baptist thing is that former member Megan Phelps Roper is really compelling. So compelling that she gets interviewed. A lot. And in some of those interviews, my name gets mentioned. As such, I was really excited back in late 2017 when the National Geographic Channel aired a series called “The Story of Us with Morgan Freeman.” In episode 4, one of the people interviewed was Megan and both she and Freeman mentioned my name. Usually, my name gets butchered but this time both Megan and Freeman pronounced my name – David Abitbol – exquisitely. Some have suggested I record Freeman saying my name and using that as my ringtone! Cool idea because Morgan Freeman played God in the Jim Carrey movie Bruce Almighty and it would be like God calling me. But no.

Anyhow, turns out that the entire series is now available on Netflix and not only that, but it’s available in Israel with Hebrew subtitles! As a result, I’ve gotten several emails from people in Israel who have never heard of the story until now. Obviously, I checked out the episode and even turned on the Hebrew subtitles, just so that I might enjoy the full authentic Israeli experience. Guess what? Whoever translated the episode did a number on my name. Not my difficult to pronounce last name which is actually pretty common in Israel – there’s a crime family and a former Mayor that have the same last name. No. They kind of messed up my first name. David. How do you mess that up? I’ll explain.

“David” is an extremely common name with a biblical origin. First mentioned in the book Samuel, the original name is Hebrew and is pronounced “D-UH-VEED.” In English it’s pronounced “DAY-VID.” So here’s where it gets weird – when the Hebrew subtitles appeared, my name was spelled in Hebrew but in a way that a Hebrew speaker would read my name and pronounce it in its anglicized version. So instead of Daled-Vav-Daled it was spelled Daled-Yud-Yud-Vav-Vav-Yud-Daled. This is crazy. Why would anyone do this?? I have no idea, but I don’t like it.

Hello to all my new Israeli fans. Fuck you if you pronounce my name wrong.