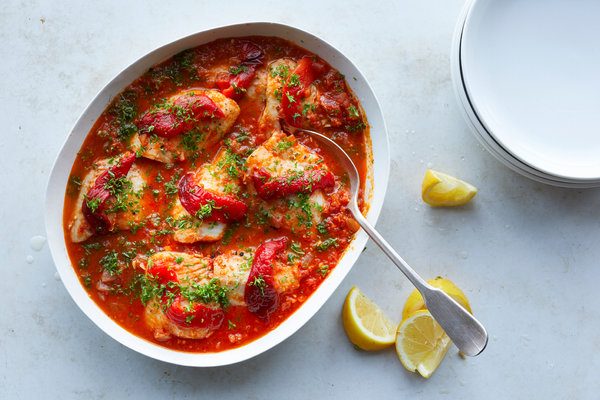 L’SHANA TOVA. Hello from Paris, La Defense, where I am busy compiling the annual recipe roundup this week.

Of course, we will start with the queen of all holiday recipes… John Nathan.

Ms. Nathan, writing for The New York Times, looks to North Africa, to the tradition spicy fish stew of Libyan Jews, called aharaimi. She writes that traditionally this Libyan Jewish dish (pictured above) is made with tomato paste, water and fish steaks. The recipe’s twist on the classic uses the last of the summer tomatoes, reducing their purée into a thick, concentrated gravy. Served with a simple bulgur pilaf. The recipe is HERE It is based on one from Professor Shalom Saada Saar (originally of Benghazi, Libya.. now Florida) and the fashion designer Hamos Guetta. 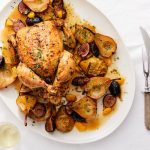 ALSO IN THE NEW YORK TIMES, Melissa Clark chimes in with Citrusy Roast Chicken with Pears and Figs.

Her Rosh Hashana sweet chicken story can be read HERE. She writes that this year she took a moderate path and roast up a bird that splits the difference between savory and sweet…. she did not use honey this time. Instead she shows how to caramelize fruit in melting chicken fat. Her schmaltz is imbued with garlic, rosemary and orange zest.

They are SHUK by chef Einat Admony; SABABA by Adeena Sussman; and THE JEWISH COOKBOOK by Leah Koenig. OLGA pulls out recipes for The Gal Gadot of tarts: Tahini Salted Caramel Tart. instead of a brisket, she makes a pot roast: Wine-Braised Pot Roast. Her salad selection is Autumn Salad With Farro, Apple and Roasted Persimmon. The recipe link are in her story.

If the WaPo blocks you, you can probably see the recipes for free on OrgeonLive HERE.

Ana CALDARONE for PEOPLE MAGAZINE, shares a story for Rosh Hashana HERE. She interviews MOLLY YEH of Farm Meets Girl, or is it GIRL MEETS FARM. In PEOPLE, Calderone reports that in Sunday’s episode of Yeh’s Food Network show Girl Meets Farm, she takes viewers through a Rosh Hashanah after synagogue brunch. Typically her mother (Judy) makes a brisket that’s braised with red wine and tomato sauce, but because we’re celebrating with a brunch she uses a lighter apple cider and white wine, as well as fennel seeds, sage, and maple syrup. Mazel tov by the way to Molly and family. Her daughter Bernie (Yeh Hagen) was born in March, so there will be three generations of Yeh’s in Molly’s North Dakota house for the holiday. They will dine on brisket, carrot hash, and apple butter rolls.

If you are having a brunch, check out the JEWISH EXPONENT of Philadelphia, PA, which posted several recipes this week. (It is blocked from my French internet provider).

The Saint Louis Jewish Light, by way of MyJewish Learning and the JTA highlights five GORGEOUS Israeli recipes, including Sea Bass With Roasted Peppers and Herb Cream Filling by Chef Mor Cohen, Herbert Samuel Restaurant at the Ritz Carlton Herzliya;
Stuffed Chard Leaves with Pomegranate Molasses from Chef Merav Barzilay of the vegan Meshek Barzilay restaurant in the Neve Tzedek neighborhood in Tel Aviv;
Apple Streusel Honey Cake by Chefs Rossella Jona and Amir Porat of Tel Aviv’s Biscotti Bakery;
an Apple and Honey Whiskey Cocktail from the Milk & Honey Whiskey Distillery in Tel Aviv; and
Cream Puffs with Candied Pecan and Date Honey Custard from the Pastry Chefs Itzik and Keren Kadosh from Kadosh Café in Jerusalem (which has been providing delicacies for over five decades.

Florence Fabricant of The New York Times also mentions Breads Bakery. Instead of baking the The Medovik, you can buy it for about $30. Ms. Fabricant also has info on Pomegranate Mandelbrot for Rosh Hashana from By The Way Bakery.

And the FORWARD’s Jonathan Hirshon – gastronomic anthropologist – goes all PERSIAN for the Jewish New Year 5780 with his duck recipe HERE. It is duck stew or Khoresh-e Fesenjn.. not to be confused with Duck Soup, which was a Marx Brother film.

Speaking of Persia (or Iran), JTA’s THE NOSHER has a recipe for Persian Upside-Down Cake with Dates and Cardamom: A sweet tribute to a Rosh Hashanah tradition by Tannaz Sassooni

In NYC, to make something DELUXE.. .you get added french fries. At The JERUSALEM POST, “Deluxe” has a different meaning.

In this article PASCALE PEREZ-RUBIN went to SAVYON in Israel to meet with chef Avner Laskin — originally from Nahariya — and a Italian trained master pizza chef, to cook a sweet challah; a roasted eggplant salad with mint; and an orange fish (pumpkins, sweet potatoes, and carrots); Chicken, potatoes and thyme (and pickled lemons); and more.

Rivky gets her own shoutout as an 8th generation baker HERE

And KAILA STEIN in has an apple honey challah you may enjoy. She also has a gin cocktail for Rosh Hashana that you can chase with a shot of honey; and a Brussels sprouts, apple and pomegranate salad. CHeck out her black eyed peas salad and plum torte as long as you are there.

SPEAKING of CHALLAHs… look at the 500 women at the MEGA CHALLAH BAKE in Rockland County NY HERE.

CAROLYN BLACKMAN for the CJN:CANADIAN JEWISH NEWS recommends recipes for Faye and Yakir Levy’s HALIBUT WITH LEEKS AND OLIVES

JUDY ZEIDLER goes sweet in the Los Angeles JEWISH JOURNAL She shares recipes for Honey-Glazed Apple Slices; Judy’s Homemade Fresh Ricotta With Apples and Honey
From her book, “Italy Cooks;” and Honey Baked Apples. She uses Rome apples. Speaking of which, I was supposed to be in Milan this weekend, but will stay in Paris instead.

Here in PARIS, SAVEURS.FR magazine has many recipes for Fall 2019, and one honey sort of cake topped with pears stands out. Could it be for Rosh Hashana? Oui? 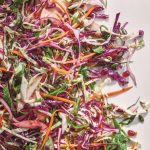 GENEVIEVE KO, the Cooking Editor for THE LOS ANGELES TIMES picked up a copy of Adeena Sussman’s SABABA cookbook. She shares recipes for a smoky eggplant galette and crisp apple and pomegranate slaw. Apples with pomegranate SCREAMS ROSH HASHANA.

Speaking of POMEGRANATE SEEDS, ROMPER actually sprinkles the seeds into their dipping honey for their apples. (see pic at the link)

Further up the California coast, THE OAKLAND PRESS takes a revisionist look at a traditional recipe What the heck is a “Fingerlicken Challah.”

Also… Faith Kramer for the JEWISH NEWS OF NORTHERN CALIFORNIA shares recipes she found for Honey-Curry Popcorn; and Honey-Plum Chicken. She serves her Honey-Plum Baked Chicken Thighs over mashed potatoes or noodles.

DETROIT’s JEWISH NEWS reviews some new children’s book. One of them is about an apple cake. They write, In this humor-filled, heartwarming chapter book, readers meet SARALEE (Ed. what a name about a cake) Saralee, an endearing 10-year-old Jewish girl whose cute-looking nose possesses the unusual superpower to sniff out scents and flavors. As Rosh Hashanah approaches, Saralee, whose family owns a restaurant, is excited to bake her zaydie’s popular apple cake with a mystery ingredient that even Saralee can’t figure out. Trouble lay ahead when a new family opens a restaurant and threatens to take over the apple cake business. When zaydie bumps his head, he temporarily forgets the secret to the cake. Will Saralee rise to the occasion? The recipe is to live for and can be found HERE.

I came over to Paris on the EUROSTAR. Before I left, the JEWISH CHRONICLE in London shared Lisa Roukin’s mother’s apple cake, made with pink lady apples

Amy Stopnicki in YORK (Canada), enticed her friend to share a recipe for Jewish New Year CERVICHE. Her friend is Naomi Nachman (famous for her Perfect for Pesach and Perfect Flavors cookbooks)

Sally Pasley Vargas for THE BOSTON GLOBE likes sauteed KALE. While others go SWEET for the near year, she is going sweet-sour.

THE BOSTON GLOBE also treats us to a recipe for Tusnisian ROsh Hashanah White Bean and Meatball Stew HERE. 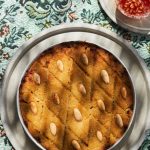 RONIT VERED for HAARETZ pays a visit to MAJDA, a restaurant in the Jerusalem Hills and shares chef Michal Baranes’ Rosh Hashanah recipes, including ones for Sardine patties with roasted eggplant in labneh and za’atar; Roasted eggplant in labneh; Pomegranate jam; and Kibbeh saniyeh with almonds and pomegranate jam. Oh, and Pistachio and almond cake

RONNIE FINE for the NEW YORK JEWISH WEEK, calls on Israeli-American chef Einat Admony (her cookbook is above) to share a recipe for BLACK CHICKEN. Her tradition is to serve foods that grow abundantly because they show evertone’s hopes and wishes for abundant blessings in the year to come. SHe goes on to interview Rahel Musleah, who was born in Calcutta to a Baghdadi family that settled in India in 1820. Musleah is the author of Apples and Pomegranates: A Family Seder for Rosh Hashanah

In LONDON, where the talk this week was on BREXIT and possible BIBi-exit, (and I was in Bloomsbury for a meeting)… Denise Phillips reported on holiday recipes for The Seven Biblical Species: Wheat, barley, grapes, figs, pomegranates, olives (oil), and dates (honey) — soup with Biblical Lentil Vegetable Soup; Heavenly Roast Chicken With Figs (FIGS not PIGS); and Grape & Pistachio Honey Cake.

JAKE COHEN for SAVEUR MAGAZINE USA shares Nanny’s Jewish New Year Apple Cake which uses honey, buttery walnuts, and plump raisins, and an apple filling for Rosh Hashanah that makes it half cake and half pie.

And SARAH JAMPEL at BON APPETIT USA magazine shares an Apple Cake HERE It is from Claire Saffitz. Claire starts her peeled apples on the stove. You need c ast iron skillet to make this upside down flipped cake.

Also in ATLANTA, MARTINE TARTOUR shares French inspired holiday traditions (no recipes)including ones for special ingredients. It remineds me of the time I spent erev rosh hashana in Paris and was treated to the head of a fish, pomegranate, chard, and pulling our enemies up from the ground (I think a bulb of garlic).

MARTHA STEWART’s site recommends a new apple from Washington State called COSMIC CRISP. They also have a recipe in the September 2019 issue for a raisin challah apple (aunt) Betty