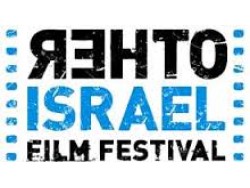 The 13th Annual Other Israel Film Festival arrived in Manhattan this week, filled with films and inspiring, and uncomfortable discussions.
So Jewish, no? Equal doses of discomfort and entertainment; all screenings are following by conversations.

Among the films are:

ABE
Featuring actor NOAH SCHNAPP (Stranger Things), as 12 year old ABE, an aspring pre-teen chef. Abe (Avraham, Ibraham) is half-Israeli (mom), half-Palestinian (dad), and endures his family’s bikcering s and fights. When he ditches camp to spend time with Chef Chico, perhaps the fusion cuisine will inspires a healing for his family.. .through food, of course. (Is it fusion or confusion cuisine… and just wait til we discuss the approporation of hummus.. haha)

MUNA — Selected episodes.
Mouna Hawastars in an eight episode series from KAN CHANNEL about a young Arab woman seeking answers — living between Tel Aviv and her much more conservative Arab village in Israel’s north. Muna is a photographer. Yaniv, her boyfriend, is an Israeli Jew (Roy Assaf), who is sort of divorced from his Jewish wife, a high powered newscaster. The episode with dialogue in Hebrew and Arabic will have English ST’s. Did I mentioned that Muna has a place in T.A. with Rani (Ala Dakka), a BFF, who loves her. (Mira Awad has writen much of the scripts)

BORDERS OF PAIN, directed by Ruth Walk, has its internation premiere in NYC. The documentary focuses on Palestininan Territory patients requiring advanced medical treatments who face bureaucratic walls to getting medical treatment in Israel. This film looks at the human consquences and heroes of the interdependent Israeli and Palestinian health and medical systems.

In CAUSE OF DEATH, directed by Ramy A. Katz, Jamal Barakat investigates what “really” happened to his brother, Salim Barakat, a Druze policeman, who was killed a decade ago while responding to a terror attack. He died a hero, he was lauded, and his story is taught to a generation of police. But who really killed Salim? Are the police withholding information from the family? Or is Jamal on a false quest? And why are the x-rays missing from Salim’s autopsy file?

In A FISH TALE, directed by Emmanuelle Mayer, we meet Johnny in Israel. He dreams of returning to Ghana with new knowledge of modern fish-farming. His wife, Thérèse, prefers Israel over Africa, and when their work visas expire, tensions rise, leading to an inevitable clash of desires.

The Fest closes with SCREWDRIVER, which is directed by Bassam Jarbawi, and is a production of Palestine, Qatar and the USA. Ziad, a former Palestinian prisoner, is released from confinement and must struggle to adjust to modern Palestinian life.

ALSO IN NEW YORK CITY this week is a festival of THIRTY YEARS OF ROMANIAN CINEMA, 1989-2019, the three decades since the fall of Communism and execution of Ceausescu. One of the films is TRAIN OF LIFE, an insane farce in which a shtetl of Jews try to deport themselves to escape the Nazis. It is Monday, November 18, and the FILM FORUM THEATER

The winner at Berlin, the darling at Toronto… now in NYC…

SYNONYMS, an Israeli film by Nadav Lapid, is in its final extended week at Manhattan’s Lincoln Center. Yoav (actor Tom Mercier) is a disillusioned Israeli who has run off to Paris’s CDG Airport and Paris following his military training. He has sworn off Hebrew; he will only speak French. He falls into an emotional and intellectual triangle with a wealthy couple (Quentin Dolmaire and Louise Chevillotte), and frequently finds himself objectified, both politically and sexually. Can ANYONE ESCAPE THEIR ROOTS? It is a film about language and physicality, masculinity and nationhood from the director of the haunting (KINDERGRARTEN TEACHER)

OVER IN LOS ANGELES, the 33rd ISRAEL FILM FESTIVAL OPENS this weekend.
(Note to file, I was a vounteer intern in NYC at the first or second Israfest Israel Film Fest in the mid 1980’s)

Among the dozens of films to be shown are:

MOSSAD!
“FROM THE FRIENDS OF THE CREATOR OF THE NAKED GUN”
Straight from the Talinn fest and the Monte Carlo fest is this story of the Mossad meets the Naked Gun. Directed by Alon Gur Arye. The Israeli Mossad and the American CIA team up to save the world from an international terror organization when an American tech-billionaire is kidnapped in Jerusalem. If the mission is a failure, the Mossad’s Director won’t be able to fulfill his ambition of lighting one of the Independence Day torches on live Israeli TV. The cast includes Tsahi Halevi, Efrat Dor, Tal Friedman, Adi Himelbloy, Dvir Benedek, Shlomi Koriat, Ilan Dar. This sexist absurd comedy Guy Moran fights for credit with American Linda Harris, who the CIA has sent so it doesnt have to deal with Israelis.

SHAI K.
is a documentray about Shaike Ophir, one of the greatest Israeli actors of all time. Known as the “Israeli Charlie Chaplin”, Ophir worked with the legendary Alfred Hitchcock and Marcel Marceau and became a megastar in Israel. Yet very few really knew the man behind the thousand faces. from the 2019 Doc Aviv fest, it is directed by Ari Davidovich

TEL AVIV ON FIRE
Salam, an aimless young Palestinian man, becomes a writer on a popular Israeli soap opera after a chance meeting with an Israeli soldier. His creative career is on the rise – until the soldier and the show’s financial backers disagree about how the show should end, and Salam is caught in the middle. Winner of the 2019 Israeli Academy Ophir Award for Best Screenplay. And winner for Best Actor at Venice. It is directed by Sameh Zoabi and written by Sameh Zoabi and Dan Kleinmann The cast features Kais Nashif, Lubna Azabal, Yaniv Biton, Maisa Abd Elhadi, and Salim Daw

In REICHMAN,
a documentary focuses on IDC Herzliya which is Israel’s first private university that can offer PhD. degrees. This marked another accomplishment for Professor Uriel Reichman, who realized his vision of establishing a different kind of Israeli academy – one that nurtures individual entrepreneurship alongside social responsibility and doesn’t accept any public funding. Director: Yariv Mozer

Straight from NYC’s Documentary Film Festival last week, is GOLDA.
Shortly before her passing, Golda Meir was interviewed for Israeli television. After shooting ended, the cameras kept rolling, recording an intimate talk with the first and only woman to ever rule Israel. Golda spoke freely, pleading her case for her term as Prime Minister – five turbulent years that secured her place in history, albeit at a high personal cost. Directed by Sagi Bornstein, Udi Nir, Shani and Rozanes it tells a side or a couple of the secrets, but not all, of Golda, ones not normally reported at your Hadassah meeting.

ZOHAR – THE RETURN
Uri Zohar, the Israeli celebrated filmmaker, left the biz and became a ultra-religious rabbi. Decades later, he is back to make a new film. The riveting portrait of a filmmaker turned-rabbi is spiced up by scenes from his previous films in which the hero, often played by young Zohar himself, would always find himself battling his inner demons. Directed by Dani Rosenberg, Yaniv Segalovich