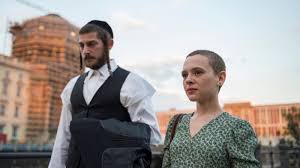 When I binged “Tiger King: Murder, Mayhem and Madness” a new 2020 docu-series (or more reality series) on NETFLIX, I hated all the characters and would not have been upset had the lions and tigers violently mauled and eaten them all.

I took solace that no one in the show were Members of the Tribe, not even the dentists (or lack thereof), not even Carole Baskin’s “missing” ex-husband, not even the lawyers for Joe Exotic (Joseph Maldonado-Passage) or Jeff Lowe.

I became worried when actor Zach Braff tweeted that he heard that Joe Exotic had a Jewish brother*** who was edited out of the Netflix show. But he was merely joking about a rumor since he was suggesting that he be cast in a future parody or dramatic version of the docu-series.

Okay Okay… I know I am totally wrong, since Director Eric Goode (The Turtle King) made the film with Rebecca Chaiklin, who you may remember from Jewish Film Fests and her productions TANGO OF SLAVES, about Ilan Ziv’s and his (survivor) father’s journey to the former Warsaw Ghetto; and another documentary, BEYOND RIGHT AND WRONG. about restorative justice between Israelis and Palestinians, and others.

Word is that Netflix is creating another episode of the series and filming on Oklahoma right before Passover to update viewers on the current state of the zoo. But let me just ad, nearly all the players in the series are criminally abusing the animals for monetary or sexual gain. The series may have wanted to expose the misuse of animals at these petting zoos, but it has ended up creating a greater desire among Americans to visit the zoos and have their pictures taken with young feline cubs, who are cute for a few months and then need to be euthanized or cared for for 10-20 years.

Here are some recommended series to binge during your quarantine.

*** Note: “Joe Exotic” has 4 siblings. Two brother, 2 sisters. His borther Garold “G.W.” Schreibvogel, sadly died at 36, They had been partners in a pet store.

“Unorthodox” (Netflix)
Etsy, a 19 year old, newly married Satmar Hasidic Jewish woman in Williamsburg, Brooklyn flees to Berlin, Germany from her arranged marriage and is befriended by a group of musicians — until her past comes calling, seeking to convince her to take that wig back down off the shelf (reference to Hedwig) and return to Brooklyn.

The 4 episode series stars Shira Haas, Amit Rahav, and Jeff Wilbusch. All Yiddish dialogue with Williamsburg accents. English subtitles. The world is kvelling for this and it is the NUMBER SEVEN most watched show on Netflix this week.

The 4 episodes are followed by a “Making of” segment at the end.

UNORTHODOX is loosely based on a memoir of the same name, but adapted by Anna Winger and Alexa Karolinski, who make Etsy less educated, and focus more on a new plot based in Berlin to highlight the idea of young Jews residing in Berlin (just like the authors). The series features a protagonist who is a violinist from Israel – Yael – who is a stereotype (but so well acted) of a pushy, direct, blunt Israeli. Ninety-eight percent of viewers side with Team Etsy; Two percent will vote for Team Yankie (her estranged Satmar husband). Less than 1% will be on Team Moishe, cuz there is always a Moishe, and they like how he swims.

Truth be told, I asked the consultant to the film, (he plays the rabbi), whether one song was chosen in the film because it is symbolically about a rose among thorns… nope.. he replied, I was overthinking it.. it is just a song.

After watching the series, I recommend that you read the book or listen to DEBORAH FELDMAN’s PODCAST on THE MOTH RADIO HOUR where she fills in you a little bit about the real story. and… SPOILER SPOILER SPOILER — (what really happened when she met a cute guy in Berlin who was the grandson of loyal SS Nazis (there was no reported vaginismus)). Also… Please don’t watch this series and think it is a documentary. Please remember this is the fictional account of a single Satmar character. If you get really into it… just google some of the 2012 blog posts by haters and journalists that pick apart the author’s memoir and take her to task for glossing over some truths that don’t lend them to her creation of her memoir.

The story of a group of Jewish Boy Scouts who worked with the French Resistance to save the lives of ten thousand orphans during World War II. Directed by Jonathan Jakubowicz, based on the life of Marcel Marceau. It stars Jesse Eisenberg, Clémence Poésy, Matthias Schweighöfer, Alicia von Rittberg, Félix Moati, Géza Röhrig, Karl Markovics, Vica Kerekes, Bella Ramsey, Ed Harris and Édgar Ramírez. It was released in the United States on March 27, 2020, by IFC Films.

“Hostages” (Netflix)
A thriller. Yael (Ayelet Zurer), a skilled surgeon, is set to operate on Israel’s prime minister. But four men invade her house and take her family hostage. if she doesnt make sure that the PM dies in surgery, her family will be killed.

“Prisoners of War” (Hulu)
The Israeli series on which HOMELAND is based. Need I say more?

Five Israeli citizens find themselves plunged into a gripping international espionage affair overnight. These ordinary people, going about their daily business, wake up one morning to discover that they are implicated in a ruthless kidnapping operation following the disappearance of the Iranian Defence Minister while on a secret visit to Moscow. News bulletins repeatedly flash their names and passport photos on screen, linking them to video footage from the kidnapping. Based on a true story of when the Mossad used the identities of real people.

“HUNTERS” (Amazon Prime)
10 episode starring Al Pacino. Late 1970s, as New Yorkers track down former Nazis to exact revenge. Bloody, gory.. and TRUE! haha. Very much like am action comic book. Nearly breaks the fourth wall. After so many hours.. they payoff is … meh. Worth it for Jordan Peele’s style at creating suspense, though.

SCHITT’S CREEK (Netflix)
Season 6 ends at Passover.
I can’t get past Season 1.
The Rose Family is used to wealth. When they get plundered by a corrupt business manager, they must decamp to a motel in a town they once bought, Schitt’s Creak. Over six seasons they must learn to love each other, see each other, and be a family. It;s all about love in a Jewish family, baby.

“The Baker and the Beauty” (Amazon Prime)
A RomCom. Two seasons. A pita baker with Yemenite roots falls in love with a supermodel (think Bar Refaeli) who is more Yekkie than Yemeni.

Messiah (Netflix)
An Israeli intelligence officer (actor Tomer Sisley) is investigating a mysterious man who perhaps is performing miracles. Is he a god? a Messiah? Or a con artist.

“The Human Resources Manager” (Amazon Prime)
AN immigrant working in Israel at a bakery dies. The HR Manager must bring his body to Romania. Based on a novel by A.B. Yehoshua> Winner of 5 Ophir (Israel Academy) Awards a decade ago

The Red Sea Diving Resort (Netflix)
The story of an actual Mossad operation in which a resort was built as a front to spirit Ethiopian Jews out of Sudan to Israel. Cast includes Chris Evans, Michael Kenneth Williams, Ben Kingsley, Haley Bennett and Alessandro Nivola.

“Dancing in Jaffa” (Hulu)
This award winning documentary follows kids in a mixed Jewish – Arab neighborhood how to ballroom dance. They must dance together and get along.