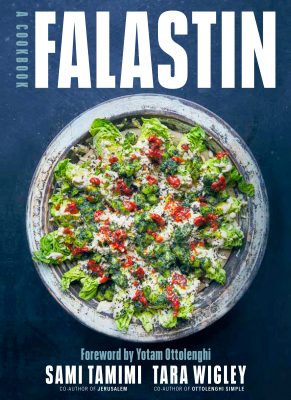 FALASTIN:
A COOKBOOK
by Sami Tamimi with
Tara Wigley, and a
foreword by Yotam Ottolenghi
Late Spring 2020
Ten Speed Press.

Yotam Ottolenghi has written several very popular, best selling cookbooks; and his restaurants in London are prime destinations for tourists and locals. I have his books and visited one of his restaurants. His biz partner, co-author, and fellow chef is Sami Tamimi, who, like Yotam, was born in Jerusalem and is queer. Like Mama in GYPSY, this is his turn, and his take on a cookbook.

Sami left his Jerusalem home and his 11 siblings and half-siblings at the age of 17; he was angry and out to prove his worth. As a teen, he worked in the kitchen of a West Jerusalem hotel, so of course, I felt a kinship with this bread lover with two Frenchies, as a fellow teen dishwasher, egg-cracker, and brunch cook.

Sami cooked in Tel Aviv for a dozen years, five of them at Lilith. Landing in London in 1997, he worked at a food truck behind Harrod’s and invented many dishes. He worked at Baker & Spice where he led the deli and where he met Yotam and they started to grow their empire.

By the time Sami became a success and returned to his family it was a 17 year gap, He had thirty nephews and nieces during those years that he needed to meet. Time flies, and he saw that the time was ripe for his own cookbook, which he wrote with Tara Wigley (Note to file… the best Palestinian cookbooks are authored by women, since they do the cooking).

It is a love letter and connector to his family and people. Just as the USA has regional cuisines, his regions differ. Sure there are a lot of tans and browns, but he punches them up with color. His recipes from Gaza are fish focused. And his recipes from the West Bank of the Jordan River focus more on yogurt, lamb, shatta (a red and green chili sauce which can keep for 6 months), and tahini.

In terms of stories, some highlights include Sami and Tar’s visit to a chef/restaurant in Haifa’s lower port road and in Nazareth, and the politics of food (or the lack of politics of food)… and how even if your are an Arab Israeli chef who studied amazing seafood techniques in Sweden, your customers still might just want a kids’ menu and a basic linguini with seafood. A lament of chefs everywhere.

The recipe of Hassan’s Easy Eggs with Za’atar and Lemon is an homage to Tamimi’s late father. Use a high quality olive oil if you are able; Aleppo chili flakes; and avocado cubes. Sami’s Fresh Herb Omelette uses baking powder and flour and is fried in olive oil. There are recipes for both Red Shakshuka and Green Shakshuka, and of course, two for Hummus (which MUST be served warm, but can be refrigerated for 4 days). Also you must use ICE cold water when making his hummus. There are three tabboulehs, since regions need to be respected.

The authors like batch cooking. It is not a crime to cook and freeze/refrigerate for another day. Like the bulgur and eggplant pilaf, or the meatballs. In Falastin, you never know how many guests will drop by and eat. One story shared is that of the village of Battir and its eggplant. While sharing a recipes for Labneh, he interviews women in Bethlehem, and shares a story. His Beet and Sweet Potato dip is quite unique, as is Butternut Squash M’Tabbal, which includes an explanation on how m’tabbal and baba ganoush differ.

You can find a recipe for Muhammarah, and a salad of Roasted Figs and Onions with Radicchio and Goat Cheese. If you are gluten free, replace bread crumbs in meatballs with chopped and grated zucchini. Unique too are Mashed Turnip with Greens, Caramelized Onions, and Feta; Chilled Cucumber and Tahini Soup; Besara Soup with Fava Beans; Charred Eggplant and Lemon Soup; a favorite and easy Meatballs and Peas in Tomato Sauce; Fish Kofta with Yogurt, Sumac, and Chile; and a Pulled-Lamb Schwarma Sandwich. Tired of Samosas, Pasties, Burek and Emanadas? Try his Sambousek, or Arabic Samosas.

In one story, we meet a home cook and educator, Ms. Islam Abu Aouda, who teaches lessons in the Aida refugee camp. They make shush barak. Her husband watches as they discuss her dreams. Though it appears loving, you can sense a tension between a conservative husband and his slightly more progressive spouse. It is complex.

Sami doesn’t avoid politics. He mentions refugees, he quotes Gaza as being an open air prison, he adds in stories of checkpoints, occupation, fishing restrictions, and the fights over West Bank olive groves. We meet Salah Abu-Ali, the guardian of the olive tree, who guards over one of the oldest olive trees, making sure it doesnt get vandalized or bulldozed. And then up pops a recipe for the popular Ramadan snack: Filo triangles with cream cheese, pistachio & rose – warbat (where it uses cream cheese instead of ishta. It is easier.)

We meet Vivien Sansour, founder of the Palestinian Seed Library for heirloom vegetable seeds. Plus we are introduced to desserts like Labneh Cheesecake with Roasted Apricots, Honey, and Cardamom, which has a wow factor of creating a cheesecake but using Labneh. (If this book is a success, I would like to see him pen a book with the recipes from his sisters Kawther and Sawsan. They would be the harder stuffed vegetable entrees that take a long time to prepare, and were excluded since most popular cookbook readers are looking for easier, time-conscious recipes)

But I know what you are thinking. 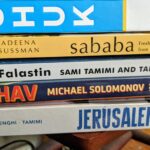 How does his hummus compare to others? He soaks his chickpeas overnight, boils them with baking soda, and food processes them with drizzled in ICE COLD water. No surprise that it is nearly identical to the Basic Hummus recipe found in JERUSALEM (2012) by Sami and Yotam. In ZAHAV by Michael Solomonov and Steve Cookuse a teaspoon of baking soda DURING the soaking process and not just during the boiling. In SHUK by Einat Admony and Hanna Gur the chefs use a slight variation when they prepare their hummus. And in SABABA by Adeena Sussman, Chef Sussman’s MAGICAL HUMMUS uses citric acid instead of lemon juice, since she writes, it adds punch without impacting hummus texture.

To make the hummus, drain the chickpeas and place them in a medium saucepan on a high heat. Add the baking soda and cook for about 3 minutes, stirring constantly. Add 1.5 litres of water and bring to the boil. Cook for about 30 minutes skimming off any foam that appears. The chickpeas are ready when they collapse easily when pressed between thumb and finger: almost but not quite mushy.

Drain the chickpeas and transfer them to a food processor. Process to form a stiff paste and then, with the machine still running, add the tahini, lemon juice, garlic and 1.5 teaspoons of salt. Finally, slowly drizzle in the iced water and continue to process for another 5 minutes: this will feel like a long time but it is what is needed to get a very smooth and creamy paste. Transfer to a bowl and set aside at room temperature, until needed. If you refrigerate it, bring it to room temperture for half an hour before serving.

Place the chillies and salt in a medium sterilized jar (boil, or run through a dishwasher) and mix well.

Seal the jar and store in the fridge for 3 days.

On the third day, drain the chillies, transfer them to a food processor and blitz: you can either blitz well to form a fine paste or roughly blitz (he says blitz in both the London and USA version) so that some texture remains (or you can super blitz it to make a smoother paste). Add the vinegar and lemon juice, mix to combine, then return the mixture to the same jar. Pour enough olive oil on top to seal, and keep in the fridge.

CHICKEN:
Preheat the oven to 425 degrees.

Place the chicken in a large bowl and add the oil, 1 teaspoon salt and big twist of black pepper from your pepper mill. Toss the mixture in the bowl to coat the wings

Transfer the chicken mixture to a 4-quart oven-proof dish, skin side up.

Add Cinnamon, Cumin, Fennel, Turmeric, and Coriander to a bowl and mix. Sprinkle a fourth of the mix on the chicken

Roast the chicken for 45 minutes

MAFTOUL
Pour the oil into a large pot with a lid and place over medium-high heat.

Add the onions and salt and let it cook for about 5 minutes, stir while cooking

Add the tomato paste and sugar and cook for 1 minute on medium heat.

Add the carrots and squash and cook for 3 minutes, stir each minute.

Bring to a boil, then decrease the heat to low and simmer for about 15 minutes, covered

Strain the vegetables, making sure you reserve the stock.

Keep the vegetables warm in a covered bowl.

Return the stock to the same pot and add the maftoul and bring to a boil.

Reduce the heat to low, then cover and cook for 10 minutes.

Turn off the heat and set the maftoul aside for 10 minutes, with the pot still covered.

After 10 minutes, fluff the maftoul with a fork and add the vegetables to the pot, along with the lemon juice and half the parsley.

Spoon the maftoul into a large, deep serving dish.

Top with the chicken, sprinkle with the remaining parsley and serve.