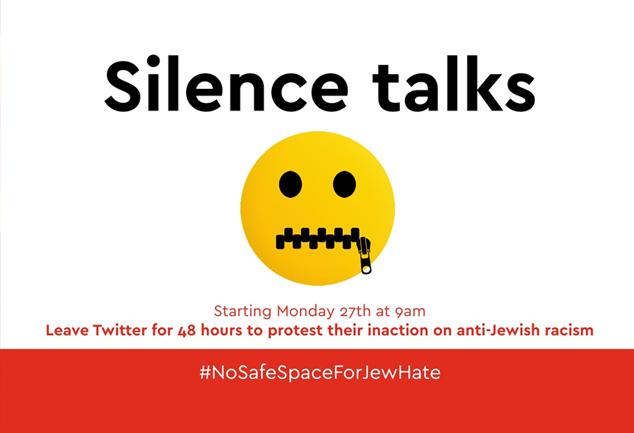 A large and diverse coalition of twitter users have announced that they are boycotting Twitter for 48 hours as a result of the social media platform’s relative inactivity in the face of antisemitic provocation. The boycott was inspired by a seemingly unhinged, 2-day twitter rant, by UK Grime artist Wiley CEO. The tweets made direct reference to a number of antisemitic tropes and accusations having to do with Jews being connected to the KKK, unsavory business practices, and stealing from Palestinians etc. Twitter eventually suspended Wiley’s account for 7-days and deleted many, but not all, of the tweets. Many were critical at the slowness of Twitter to respond to this blatant violation of Twitter’s community standards and felt that by not tweeting, they would send a message to Twitter that it needs to police the platform more effectively.

Critics feel that allowing themselves to be silenced by antisemitism sends the wrong message:

I’m not going quiet on twitter for 48 hours. I go quiet for 24 hours a week for Shabbat – for myself and my relationship with God. I’m not going to let hate be the thing that silences me. #NoSafeSpaceForJewHate

This is so misconceived that it almost feels deliberate. We don't fight bad speech by deplatforming ourselves, and why are we suddenly up in arms about this one person when David Duke has been Tweeting nonstop on Twitter since September 2009?

which is ironic, given that Sparber, like many critical of Zionism, makes use of Twitter blocklists of known Zionists to effectively deplatform Israel supporters. But I digress!

Others feel that the bad publicity might spur Twitter to take action and the message would be driven home by lowering traffic and revenue generating ad serving on the platform. As a result, the associated #NoSafeSpaceForJewHate has been trending on Twitter for the last two days.

I personally am not a big fan of boycotts and a big fan of free speech. However, this protest was spearheaded by UK Jews. They have been through a lot with all the Jeremy Corbyn/Labour Party antisemitism hullabaloo. I feel the need to be supportive is more important than whatever other issues I might have. The truth is, I’m not certain that the #NoSafeSpaceForJewHate campaign is the best way to deal with the sort of gutter antisemitism displayed by Wiley and his supporters. But I also want British Jews to know that they are being heard, so… no twitter for me for the next 2-days. Maybe I’ll use the free time to do some cleaning or to edit some video files. See ya later Twitter!