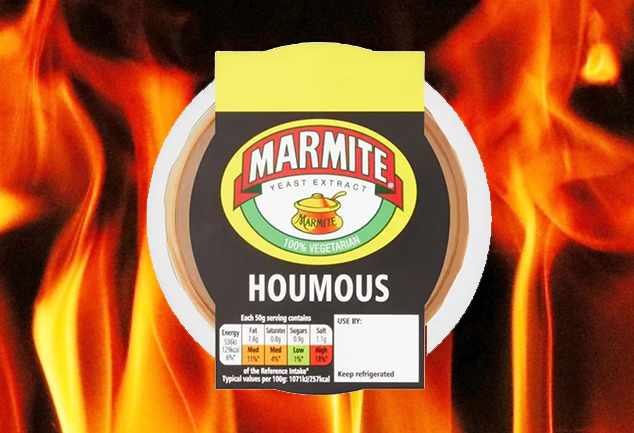 Marmite is a brown, sticky, food spread, made from yeast extract and beloved by many in the anglo world. It’s definitely an acquired taste and I never gave it any thought until they messed with my shit. See, it’s been trendy of late for hummus manufacturers to produce and market exotic flavors – probably in the hopes of gaining more of that valuable shelf space at supermarkets. This has resulted in horrific flavors like Chocolate, Chocolate brownie, Vanilla bean hummus, Orange hummus, Snickerdoodle, pumpkin spice etc. You don’t even need chick peas to make hummus – I’ve seen Avocado Hummus that’s just Guacamole with a hummus label. Why? Because I guess marketers just want to take advantage of Hummus’ recent popularity in the west.

But Hummus is not something you should toy with. The Middle East is already a swirling cauldron of perceived injustice, mistrust and resentment. Hummus is popular in Israel and this pisses off Arabs who claim it as their own and accuse Israelis of gastronomic misappropriation. When BDS activists try to push their agendas on campus, they often target the sale of Sabra brand Hummus that is partly owned by Israelis. All these exotic hummus flavors just add to the tension. But now? Now it’s about to explode.

Inspired by an idea surely born in the deepest bowels of hell, the makers of Marmite have decided to start selling Marmite “Humous.” How does this satanic concoction taste? Probably like ass, but really? Who cares! Please non-Middle Eastern people. Please stop messing with our Hummus. Please. The Independent reports:

The new product comes after Marmite launched its own peanut butter and body wash in partnership with Lynx. Now, the brand seems to have taken its cues from customers who previously combined Marmite with hummus to create a single product to satiate their desires.

I can’t believe people want to smell like a yeast infection too. Proof positive that this came from Satan himself. God help us.