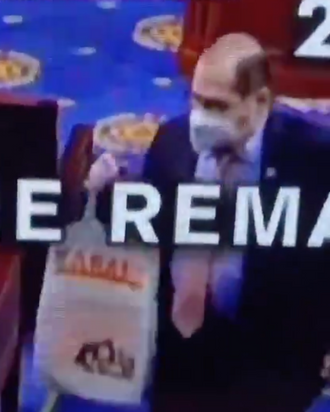 It was a day before National Pastrami Day, when Congressman Jerry Nadler of Manhattan’s Upper West Side was seen on the House floor carrying a ZABAR’S (recyclable) bag to his desk. He was among the impeachment managers. When Julian Gerson, one of his press aides, was asked what was in the bag, he replied that there was a babka and the constitution. The alleged babka made it through the magnetometer easily. Speaker of the House Nancy Pelosi announced this week that members of Congress who do not pass through the magnetometer (several GOP members were refusing to use it) will be fined $5000 for their first offense, and $10,000 for subsequent offenses.

Speaking of registered members of the GOP, Jared and Ivanka Trump Kushner reportedly did not allow members of their Secret Service security team to use their half a dozen residential bathrooms in Washington DC. The Washington Post reported that the Secret Service spent $100,000 – or $3000 a month – to access a neighbor’s toilet. WORSE… the neighbor’s toilet did not include those cute little soaps or maid service. (by the way, the Kushner’s home has more than one bathroom. We aren’t talking about access to the master bath… which I heard has a pretty nifty shower curtain which matches the curtains.) Before renting the neighbor’s toilet, Secret Service availed themselves to the toilet of former President Barack Obama, a portable toilet, and that of Vice President Pence over at his Naval Ob. house.

Did you the story from The Marshall Project on the additional federal costs incurred in 2020 to carry out federal prisoner executions? Among the millions spent, $25,000 was spent on kosher food and $6480 was spent on potato chips (and $33 on Pizza Hut). Was the kosher food for the person who carried out the lethal injections? Or maybe for the family of one of the prisoners who identified as a messianic Jew while on death row? I will have to research that question further.

Speaking of kosher food, did you read about the Girl Scout troops that have decided not to sell Girl Scout cookies in 2021. They say that the palm oil used to make many of the cookies is from Indonesia and Malaysia and use child laborers to harvest the oil and kernels. Will the use of child labor have an effect on their OU Orthodox Union kosher certification? Umm… what do you think? I wonder if a troop that meets in a synagogue will skip cookie sales this year until the child labor issues are resolved.

NEVER WASTE A GOOD CRISIS…. not to be snarky but I would not be surprised if I get a donation solicitation from the Hillels at Johns Hopkins and Penn. At Johns Hopkins, a Teaching Assistant allegedly said she would give Jewish and/or Zionist students lower grades. Or that is what she polled and said on social media. In November, Rasha Anayah posted a poll on Twitter account asking if she should fail Zionist students because they support “ethnic cleansing.” She was gunning for a student who went on a Birthright Israel trip. Over at Penn and the Penn Museum, some students want a teacher fired. The school already took his Spring 2021 classes away. Robert Schuyler gave a Nazi salute and said “Sieg Heil” to an online moderator when she did not agree with his question during a meeting and sought to consider it at a later time. Over at UC-Riverside, Dylan Rodriguez, a professor and the current president of the American Studies Association tweeted this week that “A number of Zionist organizations want to convince us that Arab American Studies is ‘anti-semitic.’ This is not only intellectually insulting but is also an inherently racist position…,” Some readers took offense. One of the Simon Wiesenthal Center in Southern California said it was an example of how professors try to “demonize Zionism” and tell Jews interested in social justice that they can’t be Zionists. When criticized for his tweet, Dr. Rodriguez tweeted that he rejected the premises enabling the weaponization of the terms ‘anti-Semitism’ and ‘hate.’ He felt that his critics exemplified toxicity AND…. Police in suburban Morgantown, WV received a call that alleged a man in a red hat was asking where he could find the Jewish student association building for West Virginia University. On the one hand, it is easy to google. On the other hand, white supremacists and people like Senator Tommy Tuberville are not known for their above average IQs. We hope and pray all remains safe and calm.

Did you hear the @MissMayim, Mayim Bialik, currently starring in her own series KAT, will guest host this Spring on JEOPARDY! She’ll take #DreamComeTrue for $500 please… and a shot of whiskey that tastes like a penny