One of the most viewed Israeli television series, launched in Fall 2020, is Valley of Tears, a ten episode saga about a tank crew, and some Golani, intelligence and other soldiers in the Golan Heights and Mount Hermon during the first few days of the 1973 Yom Kippur War.

The series is available in North America on HBO MAX. Directed by Yaron Zilberman, and based on a script led by by Ron Leshem and Amit Cohen, the series was in pre-production for over 10 years and reportedly included insights from some of Israel’s top novelists and veterans of the war (in some parts it purposely uses 2020 jargon even though it is set in 1973 in order to communicate the series’ themes better).

In Hebrew, the show’s title is Emek HaBakha; the original title was Sh‘at Ne’ila, the time of Ne’ila, in reference to Yom Kippur 1973, when the gates are closing and everyone’s future, life and death, are written and sealed in the Book of Life.

Underlying the stories and battle scenes is a subplot of the Black Panthers and the societal tension between Ashkenazim and “Blacks,” pilots and infantry, tank commanders and crews, an intelligence NCO and his Golani officers, and the political elites and Israel’s poor.

The episodic broadcasts on Kan in Israel were followed by panel discussions and songs. The show has opened old wounds and raised the discussion of PTSD and the after effects of battles and military service in the country. It has increased intergenerational discussions of the 1973 conflict and the changes – political and societal – it amplified.

If you watched the series on HBO MAX, there is an additional few minutes after the end credits of Season 1: Episode 10 (S1E10) that I am interested in discussing. 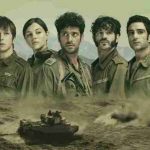 SPOILER SPOILER SPOILER — DON’T READ THIS PARAGRAPH IF YOU HAVENT WATCHED THE SERIES. —
In the scene after the end credits of Episode 10, the soul of a dead soldier (I am purposely being vague) is seen in a blood stained uniform from 1973, walking the streets of B’nei Brak, among haredi residents. It is about four decades after the 1973 war. This dead soldier, perhaps, is one of many souls of departed soldiers, walking invisibly through Israeli society. He pokes his head into a yeshiva study room where dozens of ultra-Orthodox men are debating and studying. They ask a bearded veteran of 1973 and other earlier tank battles for his opinion of a passage. The man reads what I believe is a passage from Eruvim 13b in the Babylonian Talmud. A years long debate between the houses of Hillel and Shammai. Is it better to have been conceived and born? This is one of the few times the house of Shammai won the debate. Is this scene meant to show how a character changed his behavior? Is the passage meant to show how Israeli society was up-ended after the War? Is it that not living is better than living, but as long as we are living, we should strive to be better? Did society change for the better, or just change after 1973? The eyes of the dead soldier’s soul and the teacher meet. There is a moment of recognition and memory. END SCENE. Do you agree with how I viewed it?

Speaking of which, I think I noticed one of the actors from VALLEY OF TEARS (Lee Biran), who in the Zahal was a musician, singing during the Hanukah FESTIGAL special in December.

With that in mind, here is a playlist of some of the songs featured in Season 1 of the series:

Kaveret – Poogy – YO YA
I got a harsh sentence
They sentenced me to death
I sat on the electric chair
Said good-bye to my (car)
I hoped that at least
I could change chairs
Because they say
(If you change your place you change your luck)
.. watch and learn from the ant…. (Two Lovim is better than one Lo’vim(drowning)

RUTHI NAVON – Electricity in Your Palms
Love me.. caress me

Shlomo Gronich and Matti Caspi – God Have Mercy on Kindergarten Children (in Performance – Yom Kippur War, 1973)
God has mercy on the kindergarten children / Less so about school children. And on the great he will have no more mercy
/ Will leave them alone / And sometimes they will have to crawl on all fours

The song was written by Ehud Manor and composed by Nurit Hirsh. The song represented Israel at the 1973 edition of the Eurovision Song Contest, as the country’s debut entry in the contest. It was Israel’s 25th birthday, they were still riding high on the euphoria of the 1967 war, in the quiet before the storm, in delusions of superiority

YOM YAVO – From the musical DONT CALL ME BLACK

MOHAMED FAWZI
Did the mothers of both sides of the soldiers sing the same songs to their children?

KAN 11’s VERSION OF LEONARD COHEN’S WHO BY FIRE

Where is the soldier (Ahuva Ozeri)

Rotem Bar-Or, Daniela Spector – Do not be afraid

THE LAST SONG OF SERIES 1 is sung by Avichai Hollander, who realized he suffers from PTSD and is now starting his musical career, with a beautiful and sad song, “Not Calm Down”, which he sang to his son.