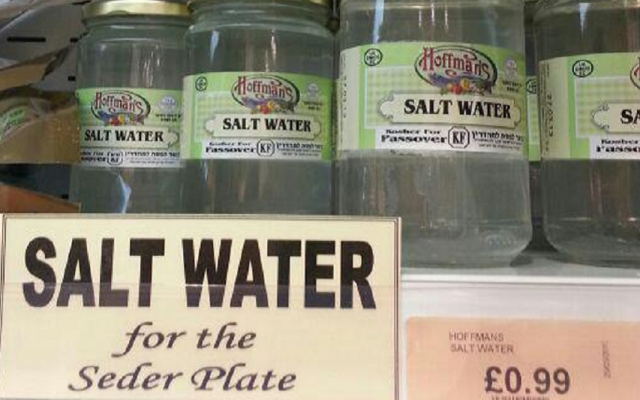 As Pesach 2021 approaches, trhe media and internet are filled with new recipes and hechshers to help us elevate our holidays. I have heard a lot of buzz about Cobra K, which I am assuming is a KoP hechsher of a “K” inside a Cobra.

As we do each year, let’s start with the reigning Queen of Jewish recipes: Joan Nathan.

Writing for THE NEW YORK TIMES, Joan Nathan explores the Judeo-Spanish/Moroccan Pescado Blanco: Saffron Fish with Red Peppers and Preserved Lemons in “This Passover Recipe Tells the Story of a Family Tree.” The family’s interpretations of and additions of spices and vegetables to a Moroccan Jewish recipe reflects their history and that of Sephardic Jewry. Her story starts with a grandmother (Violette Corcos Budestchu) in Fez, Morocco and Paris, and flows to economist Dafna Tapiero, the granddaughter in New York. Dr. Tapiero is one of 12,000 descendents of the famed Corcos family among Sephardic Jewry. Jerusalemite Danielle Renov, the author of Peas, Love & Carrots (Mesorah Publications, 2020) is a distant cousin. The recipe can be found here.

Speaking of cousin Danielle RENOV, check out her (and Joan Nathan’s) recipe in THE PROVIDENCE (RHODE ISLAND) JOURNAL for a quinoa salad and Matzah Balls HERE.

Also for THE NEW YORK TIMES, Melissa Clark, in the A Good Appetite column explores how to prepapre thick stalks of aspargus, and not the thin stalks that her father attempted to grow in their Brooklyn backyard growing up, and the one her mother served at their Passover seder with beef brisket. See it HERE. You can also see Melissa’s latest cookbook from last Spring HERE.

Also in The TIMES, London based Israeli chef Yotam Ottolenghi discusses Polenta. I guess he didn’t get the memo on Passover.

FIVE SEDERS (in search of a Haggadah) are developed in THE NEW YORK TIMES by (the Moses and Miriam of Cookies) Susan Spungen (Eric Asimov lists a few wine varieties as pairings). See them HERE

Who is the publicist for this guy? You cannot shake a shankbone without seeing a story on sumac addicted Ashkanazi Mensch, Jake Cohen, his Persian/Iraqi Sephardic husband, and Jake’s newly published JEW-ISH COOKBOOK for the Modern Mensch. THE WALL STREET JOURNAL features this Jewish tiktok star at with tips for some hip recipes and entertaining tips. His tip… size matters when it comes to tongs.

What do you do with that jar of Gold’s horseradish that is always left half full after the seder? Ellie Krieger for THE WASHINGTON POST serves up a sheet pan Horseradish-Crusted Cod With Carrots, Parsnips and Mustard-Dill Drizzle entree

Also in THE WASHINGTON POST Becky Krystal shares Haroset recipes in Mix up your haroset recipe this Passover with a world of fruit, nut and flavor combination growing up, she liked her apples and wine soaked walnut mortar. Now she embraces complex flavors: Apple, Walnut and Fig Haroset With Mulled Wine Syrup. Did I mention that she quotes JAKE COHEN?

Leah Konig for THE WASHINGTON POST writes the matzo brei is a blank canvas upon which your can add creativity and toppings. Such as Mushroom Matzoh Brei With Lemon-Herb Sauce. Visit Leah Konig’s lastest Jewish cookbook HERE

Olga Massov in THE WASHINGTON POST kvells for Kugels. Embedded in every kugel there is a story. In Crisp, Golden Potato Kugel can be the Highlight of your Passover table, or any other meal Massov tells how she ate her first kugel at 12; she and her mishpacha had recently arrived in the United States from the former USSR and her mother’s distant cousins, Lubavitch Hasidim residing in Crown Heights, Brooklyn, invited her family to stay with them for Passover.

JAY KITTERMAN of the Culinary Institute at LLCC – Lincoln Land Community College in Springfield, Illinois shares a recipe for a brisket in the STATE JOURNAL-REGISTER The recipe is from “Tales of Jewish Kitchens” from the Temple B’rith Sholom Community Dinner (1974, Estie Karpman)

JESSICA YADEGARAN for the SAN JOSE MERCURY NEWS also took a look at Jake Cohen Jew-ish book. In she makes an appetizing seder plate She writes, “Instead of a sad gray dollop of horseradish to symbolize the bitter herb of slavery, Cohen whipped up zingy horseradish mayo and slathered it on pieces of matzo for each guest. In place of a lone lamb shank, or zeroa, which recalls the lamb sacrificed by the Israelites before fleeing Egypt, Cohen plated 30 pomegranate-kissed barbecue chicken wings. And standing in for the roasted egg reinforcing the circle of life, smoky deviled eggs for everyone.” He zhuzhed up Aunt Susi’s brisket into a Roasted Carmelized Tomato Brisket. Had this been in the pots of Goshen, the Israelites would not have left Mitzrayim. The recipe can also be found in the SANTA CRUZ SENTINAL

THE MERCURY NEWS was one of the few media sites that wrote about THE FESTIVAL OF CHAMETZ where you gourge yourself with puffy leavened breads.

THE MERCURY NEWS actually can’t get enough of Jake Cohen Jew-ish book. They add in two more of his recipes for GEM SALAD with TAHINI and PICKLED CELERY (yes celery, not cucumber) DRESSING and for Macaroon brownies. (I swear, I think 5 media sites all did the macaroon brownies)

A little North in San Francisco, EATER SF recommends a sandwich on what appears to be rye bread. I would skip their Passover recommendations.

SYBAL SANCHEZ for the JTA can be found in the INTERMOUNTAIN JEWISH NEWS with her Mexico — Passover Mashup Straight from Pachuca, Mexico, Sanchez interviews chef Alegra Smeke, a former president of a Zionist women’s group. No recipes, but a cute slice of lives. It can also be read on HAARETZ and the FT LAUDERDALE SUN SENTINEL

NINE FRIEND for FOOD & WINE magazine has a recipe for passover coconut macaroon brownies Food and Wine, you will recall attempted to rate the top bagels in the USA a few weeks ago. They do better with non leavened products.

THE DAILY MEAL shares a recipe from ArtScroll for Kosher for Passover Teriyaki sauce/marinade HERE. But don’t add it to your haroset. They also share a recipe for Brisket Egg Rolls for Passover for Leah Schapiroa and Victoria Dwek.

FAITH KRAMER for J: The Jewish News of Northern California shares her Passover menu with Turkish influences Recipes include those for Salmon with Rhubarb; and Yukon Gold Mashed Potato Kugel with Eggplant and Mushrooms. For Turkish Influence, visit HERE. Faith Kramer also has the recipes HERE for Yukon Gold Potato Crust Pizza with Lamb and Herb Topping and Garlic-Lemon Sauce that she fed to her pizza loving kids.

In London, the JEWISH CHRONICLE shares a recipe for chometz-free sticky toffee pudding and gooey chocolate brownies. They have more cookie recipes HERE.

BETH SEGAL for CLEVELAND.COM shares recipes for Passover popover even mining a cookbook with over 500 of a rebbitzin’s Passover recipes from fifty years ago.

THE LOS ANGELES TIMES offers general cooking tops, as well as a recipe for sour cherry-almond cookies and Passover Gougères With Leeks And Mushrooms.

Also in THE LOS ANGELES TIMES Alice Short, the acting food editor shares an essay by Julie Giuffrida, a cook and a recipe tester on their Food staff. Julie writes that she has three basic approaches to cooking for Passover. One of the recipes and styles is Matzo Brei Chilaquiles. This breakfast mash-up from cookbook author Joan Nathan, inspired by a phone conversation with the late Jonathan Gold. The swap in matzos for corn tortillas. See also the Roast Chicken with Honey and Thyme, and Parsley- and Garlic-Stuffed Portobello Mushrooms.

Ni’KESIA PENNEL for DELISH.COM shares This Passover ‘PassCaken’ Is A Coconuty Dream Come True. You’ll go nuts for this one! Of course, did you know it is $99 for the matzo-crusted coconut macaroon pie? Topped with flourless chocolate cake and raspberry mousse, the nearly six-pound cake is garnished with gilded chocolate and sea salt matzo crumble. (I will stick with U Bet syrup in a glass of kosher for passover millk.

THE JEWISH EXPONENT in Philadelphia shares recipes for Baked Sweet Potatoes with Sauteed Greens; POACHED SCRAMBLED EGGS (in water); and CREAM OF WHATEVER SOUP.

JESSICA GRANN for the Pittsburgh JEWISH CHRONICLE turns readers on to the PAVLOVA The dessert is gluten free, bread free, leaven free, and matzo free.

HELEN GOH for the SYDNEY MORNING HERALD in Australia shares flourless almond and chocolate crisps She writes that you can substitutes caraway for cardamom or currants for sour cherries and barberries. By the way, Goh was born in Malaysia and grew up in Australia. When she spent time in London with her now husband, David Kausman, she studied for a doctorate and worked for and collaborated with … Yotam Ottolenghi.

The NBC TODAY SHOW broadcast a story on New Orleans chef Alon Shaya who helped Steven Fenves, 89, recreate the Passover recipes of his pre-WWII childhood. In 1944, Fenves and his family were forced out of their homes on the Yugoslavia-Hungary border and into a Nazi death camp. As NYU Professor Hasia Diner wrote, “Perhaps more than any other aspect of culture, recollections of foods eaten take us all back to who we were, where we came from, what we have lost.” JAMIE GELLER for the TODAY SHOW also recommends taking leftover brisket and turning it into a frittata. And JAMIE GELLER also shares JAKE COHEN’s husband’s mother’s Iraqi style Roasted Passover Salmon. They also stopped by the Harlem-based TSION CAFE for Passover, Ethiopian style Shakshuka by chef Beejhy Barhany.

For the Mexician Jewish and Mexican Israeli community, Chef Katsuji Tanabe, the Mexican-Japanese chef based in Chicago and LA, famous for his Kosher tacos in Beverly Hills, tells Enlace Judío that for a good Pesaj, add lots of spices and flavor.

The Grand Bakery in Oakland, after 6 decades in the San Francisco Bay area, shares its macaroon recipes with THE SAN FRANCISCO CHRONICLE HERE.

I know you are probably wondering what FAYE LEVY AND YAKIR LEVY are writing about for Passover 2021. For the ORANGE COUNTY OC REGISTER, they share tempting appetizers, including roasted potatoes and sauteed leeks.

CNAAN LIPHSHIZ of THE FORWARD might not share a recipe, but his story on Jews and their tradition in Azerbaijan and the Central Asian region is a worthwhile read.

MAX KALNITZ for INSIDER ponders a dozen things you could make with MATZO, including matzo pizza, matzagna lasagna and matzo shepherds pie.

COME BACK IN A FEW HOURS
MORE COMING SOON,…