Home / Isralicious / Hey Palestinians! Get the hell out or we’ll fucking kill you! 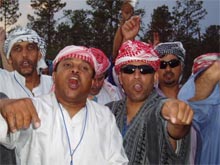 Related Items
← Previous Story The Paradox of Peace
Next Story → Should I stay or should I go?