a glimmer of sanity 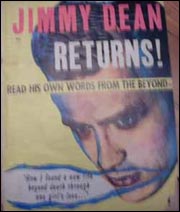 third date in the bag. early head-over-heels period definitely over. some measure of clarity and perspective able to flow in now. since getting pissed off at her we spoke a few times and last night went out until very late by the beach at a cool pub that i like. we are still firmly in the process of getting to know one another but now i can have more perspective. i still think she’s amazing and that she may be the first girl i could love and see myself with. and i still think she likes me a lot since she is not extremely-crazy religious and wants to have a “fun” life too, not just strictly orthodox. hell, we drank and even smoked and – golly – i even heard her curse for the first time. so maybe we’re not so bad for each other – i can learn from her to return more to the religion that i left behind and she can learn from me (or express with me) her non-religious interests. it’s just funny how un-Israeli this relationship is.

but it is pretty much right in line with the religious way of dating (minus the drinking and being alone with me in my apartment when my roommates were gone) – we see each other pretty frequently (i need not remind you that we only met for the first time last thursday!), talk a lot, sort of on a fast-track to get to know each other (so as not to waste time), and we try our best to not play any relationship games. we call each other when we feel like it and don’t do any of the weird rules or math that “game players” do. even though this isn’t the best example of religious dating, its the closest i’ve ever come. although i still pine for the moment she’ll pledge her unending love for me, i am becoming more ok with simply being with her, passing the time with her and getting to know her. the biggest frustrating aspect is still the complete inability to hug and kiss her. i’ve even started to have actual dreams at night of what it will be like when we kiss for the first time. isn’t that insane? she isn’t completely “shomeret” (the practice of keeping yourself from touching a member of the opposite sex until marriage) because we do occasionally hit each other when someone makes a funny or insulting joke, we poke each other at random times and even shake hands as a joke every now and then. for these silly signs i am inclined to think that its merely a matter of time and not a matter of strict observance before i can hold and kiss her. of course, some things we would never do (basically anything more than a little kissing – and even that i’m not sure of) but i’ll worry about those when we get there. before then it would be nice to simply hold her hand as we walk along the beach. so i guess this means that i am more calm and able to have more perspective because i’ve seen signs of openness and possibility that i didn’t see before. as a result, i don’t need to sit around pissed off at G-d for playing a joke on me but can rather enjoy and go with the flow because i think there is definite upside potential here as we continue to get more comfortable with each other. make any sense? but shit, i still want to feel her tongue down my throat!