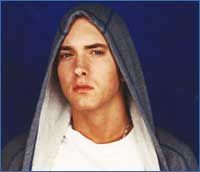 Eminem, aka Marshall Mathers is set to play undefeated Jewish boxer Dmitriy Salita (17-0 with 11 KOs) in an upcoming Disney flick to be directed by Jerry Bruckheimer of Top Gun fame. The film will focus on Dmitriy’s relationship with his trainer Jimmy O’Pharrow. In a recent article in New York Sports Express, O’Pharrow said this about his protege:

I seen every kind of kid come through the doors, but I ain’t never seen one like Dmitry. Kid looks Russian, prays Jewish, fights black, so we got together and it’s history after that. God’s been good to him. God’s been good to me. He believes in God, I believe in God, so it’s a spiritual thing.

Like Esther, Salita does not work on the Sabbath. Obviously a natural fit for Disney. As for Eminem’s participation in this project, Dmitriy credits rap for his success: “The radio at Starrett was always tuned to HOT 97. A lot of Biggie. A lot of Tupac. I think that changed my style. That’s what gave me some rhythm.” 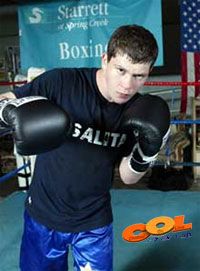 Variety broke this story back in April. Here’s the article:

Disney and producer Jerry Bruckheimer are getting in the ring with “Golden Boy.”

Scripted by “Remember the Titans” writer Gregory Allen Howard, drama is based on the story of welterweight contender Dmitriy Salita and his relationship with his trainer, Jimmy O’Pharrow.

A Ukrainian Jew who moved to Coney Island at age 9, Salita sought out at the Starrett City Boxing Club and with its fabled trainer Jimmy O when he was 13 because he was getting pounded by his schoolmates. At the club, most of the fighters were African-Americans and Puerto Ricans who turned Salita into a human punching bag until he grudgingly gained their respect because of his resilience. A few years later, Salita won his weight class in the Gotham Golden Gloves and was named outstanding fighter in the tournament. He turned pro and is now 17-0.

Howard, who corralled life rights for the fact-based gridiron hit “Remember the Titans” and then set up the film with Bruckheimer exec Chad Oman, did the same on “Golden Boy.”

“What makes this work is the bond between the two guys,” Howard said. Jimmy O says that Dmitriy “looks Russian, prays Jewish and fights black.”

Howard has two other projects at Disney: “We Are a Chain,” about a group of Mennonite kids who won a state hoops title, led by a black coach; and “Drummer Boy,” a coming-of-age story set during the Civil War.