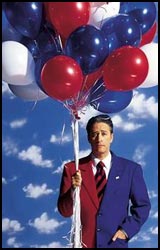 According to the University of Pennsylvania’s National Annenberg Election Survey, viewers of Late Night with John Stewart scored 16% higher than people who did not watch late-night comedy, in a six-item political knowledge test about the current US presidential campaign.

The Annenberg survey found that people who watch The Daily Show are more interested in the presidential campaign, more educated, younger, and more liberal than the average American or than Leno or Letterman viewers. â€œHowever, these factors do not explain the difference in levels of campaign knowledge between people who watch The Daily Show and people who do not,â€ Young pointed out. â€œIn fact, Daily Show viewers have higher campaign knowledge than national news viewers and newspaper readers — even when education, party identification, following politics, watching cable news, receiving campaign information online, age, and gender are taken into consideration.â€

Go figure. And everyone assumed the Daily Show was for morons or something. Chag Sameach John Stewart!