No, I didn’t go to an Israeli ’60s hack sci-fi convention and meet famed author Stanton A. Coblentz (although that probably would have been interesting). And I did not actually, per se, visit our planet’s lone satellite, immortalized by such groundbreaking cultural events as Apollo 11 and Pink Floyd’s Dark Side of the Moon. What I did do was spend several days on a kibbutz in the middle of the Arava Desert, somewhere along the border with Jordan not far from Eilat.

For those of you not familiar with this particular part of our people’s ancient land, the Arava basically looks like the surface of the moon. As I trudged across the endless fields of jagged rock devoid of any semblance of vegetation, I could almost hear Obi-Wan Kenobi in my mind saying, “The Jundland Wastes are not to be travelled lightly.” Although that could have been the 110-degree heat and the clouds of flies orbiting around me talking. 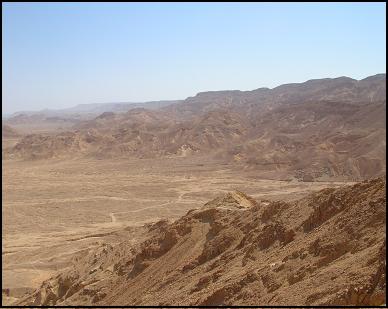 Obviously when an area of land gets up to 120 degrees in the sun, is covered by nothing other than sharp rocks, has no vegetation, one rain a year, and is inhabited only by flies and scorpions, this is nature’s way of telling you to turn the camel around and go back to Kansas. But of course that is not the Zionist way, and along the road from the Dead Sea to Eilat there is a whole string of kibbutzim who, using drip irrigation, sprinklers and probably black magic kabbalah pulsa-denura type things, have done a wildly successful job of, you guessed it, making the desert bloom. This land responds to us, there’s no two ways about it, and I think it’s in danger of turning me into one of those old, classic dyed-in-the-wool Zionists: “120 degrees? No water anywhere? Scorpions? Within rifle range from Jordan? Sign me up, Ben Gurion!”

But what kind of people decide to live and work on the moon? As it turns out, a motley crew of old-school kibbutzniks, new-school capitalist kibbutzniks, foreign volunteers from Belgium to Brazil and everywhere in between, and even a healthy smattering of both Israeli and foreign Arabs studying the Israeli desert irrigation miracle. As it turns out, we can all get along like the best of friends in the desert. My thorough investigation has led to me to conclude that the reason for this easy harmony is twofold: one, it’s too damned hot to be starting anything, and two, there is liberal usage of a certain crop that certain kibbutzniks have taken advantage of their reclaimed desert land to cultivate. No doubt mainly for its industrial application, of course, but why let the rest go to waste? Such is the harsh logic of the desert.

It’s encouraging to know that in some way some form of classic “make-the-desert-bloom” Zionism is still very much alive in Israel, that not everyone has decided that their life would be better served by a nice apartment with a functioning air conditioning, satellite TV and easy access to Tel Aviv’s trendiest acid washed jeans. Somewhere out there, there are still Jews crazy enough to go live on the moon. And those guys rock.