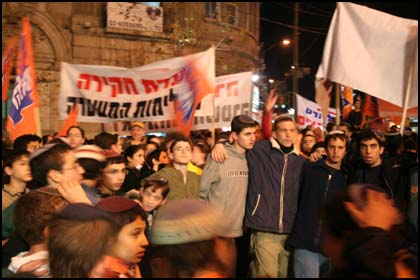 Rally Calls for Amona Inquiry
The theme was “Olmert is bad for the Jews” at the rally tonight at Zion Square in Jerusalem. Organized by the Yesha Council of Jewish Settlements, speakers at the rally called for the formulation of “a state commission of inquiry into what they called “the brutal police violence” during the eviction of thousands of settlers from the illegal outpost, where more than 200 people were injured in the worst clashes between settlers and police in years.”

Many of the 80,000-100,000 attendees were teenagers and pockets of the rally had a rock concert feel to it. There were lit lighters hoisted in the air and orange-clad groups of boys wearing knitted kippahs eyeing long skirted groups of girls. It was kinda sweet and many clearly relished the opportunity to be out on a relatively balmy Sunday evening.

You can read more about the rally at the Jerusalem Post and/or Haaretz. 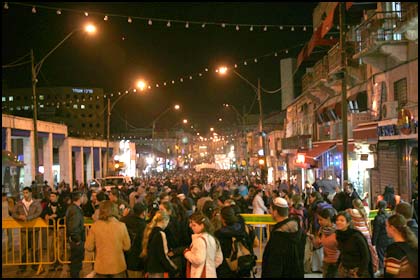