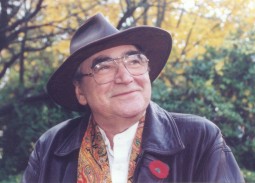 Rudolf Vrba is one of the five (5!!) Jews who managed to escape Auschwitz. He spent most of his adult life as an academic – Associate Professor Emeritus, Department of Pharmacology & Therapeutics, Faculty of Medicine, University of British Columbia, Canada. He died today, at the age of 82. As an escapee, he went to the Allies and informed them about the genocidal systematic killing at Auschwitz. He did so just before the vast majority of Hungarian Jewry was deported, but thanks to him at least 100,000 Jews were prevented from going.

Rudolf Vrba was born as Walter Rosenberg in Topolcany, Czechoslovakia in 1924 as the son of Elias Rosenberg (owner of a steam saw-mill in Jaklovce near Margecany in Slovakia), and Helena neÃ© Grunfeldova of Zbehy, Slovakia. At the age of fifteen he was excluded from the High School (Gymnasium) of Bratislava under the so-called “Slovak State’s” version of the Nuremberg anti-Jewish laws. He worked as a labourer in Trnava until 1942. In March 1942 he was arrested for being Jewish, and on June 14th, 1942, he was deported first to Maidanek and from there he was then transferred to Auschwitz on June 30, 1942. He remained Auschwitz prisoner no.44070 for almost two years. He escaped from the Auschwitz death camp (together with Alfred Wetzler) on April 7th, 1944 and under his “nom de guerre” as Rudolf Vrba he co-authored (with A. Wetzler) the Report on Auschwitz death camps on April 25th, 1944 in Zilina, Slovakia. This report became known in the historiography of the Holocaust as the “Vrba-Wetzler Report” or “Auschwitz Protocols”, and contains a precise description of: 1-the geography of the Auschwitz annihilation camp; 2-the methodology of the mass murder in gas chambers practiced in Auschwitz already for two years; 3-a history of events that took place in Auschwitz since April 1942. The Vrba-Wetzler Report reached the Governments of the Allies in June 1944.

And the impact of the report (from Wikipedia)?

Once they’d crossed the Slovakian border, the men traveled straight to the Slovak Jewish Council to tell them what was happening inside the camps, dictating a detailed 40-page report on every aspect of the Auschwitz camp and its workings. The report was initially sent to Slovakia, Hungary, and Switzerland, but was not passed immediately to the Jewish population in Hungary. The circumstances surrounding this have been the topic of a bitter debate ever since (see Rudolf Kasztner). John Conway, professor of history at UBC, has written:

A month later, nearly half a million Jews were deported to their deaths. None of them knew what was in store for them. As a result, Vrba and Wetzler concluded that their information had been suppressed. Vrba, for one, remains convinced that if the intended victims had been warned, they would have resisted or hid or fled. (Globe and Mail, March 31, 2006)

The report reached the British and U.S. governments by the middle of 1944, when it received wide publicity. At the beginning of July, the international outcry caused by the report apparently played a major part in the decision of the Hungarian leader Admiral Miklos Horthy to halt the deportation of the Hungarian Jews to Auschwitz. Thus, Vrba and Wetzler are widely given credit for saving 100,000 lives.

Vrba accused the Hungarian Jewish leadership â€” and even the Slovak Jewish leadership, which are rarely so accused â€” of squandering the opportunity given by the report to save a very large number of lives. His biographer Linn believes that Vrba’s stance on this issue has led to the memory of his heroism being actively suppressed.

The Canadian Jewish News offers the most informative article of the three sources in this post about this brave (he became a partisan fighter after his escape and met with some success fighting the Nazis), resourceful man who saved tens of thousands of Jews – and almost hundreds of thousands -from certain death.

Alav hashalom (may peace be upon him).