Today, a Qassem rocket landed near a Western Negev kibbutz, one of over 1200 Qassems fired into Israel since the disengagement from Gaza. This rocket, however, was different. It was marked with the words, in Hebrew, “Al Quds.” 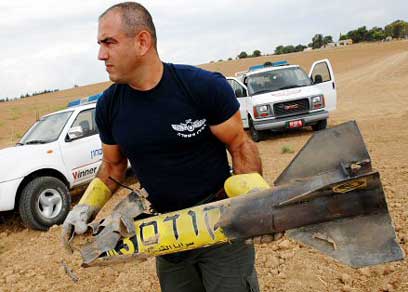 The rocket was fired by Islamic Jihad gunmen [Ed. note: they are terrorists, dear Reuters; they are terrorists targeting civilians, not gunmen]. The group’s spokesman in Gaza, Abu Abdullah, explained to the Reuters news agency that the decision to write the rocket’s name in Hebrew was aimed at ensuring that credit for the attack goes to the appropriate group.

“This is meant at distinguishing between our rockets and rockets fired by other organizations,” he stated.

And since this conflict and its ongoing attacks are heavily televised and covered by the media, we can also call this a form of Product Placement.

Oh my gosh! Think of the possibilities! You want to fly a plane into a skyscraper? Paint its sides with the logo of your choice. You want to blow yourself up on a crowded street? Lots of those who’ve tried have been decapitated in the process, so tattoo your forehead. The publicity is free and worth millions.

In fact, why stop there? Why not sell your services to corporations? You think that explosives manufacturer wants to remain unknown while you garner all the credit for killing yourself and lots of innocents? Think again! They will pay and pay well to have all this publicity. Maybe some important Saudi minister wants to gain some publicity? How about a ruthless dictator looking to show his people he really likes dead Jews? Hmmm…maybe Jewish blogs can buy space…

In fact, now that I think about it, why not sell sponsorships? “This attack on an IDF outpost has been brought to you by XYZ Financial Brokerage…we know how to dig deep for information, find the light at the end of the tunnel and bring you results that’ll knock you dead and that keep on paying dividends for months and years.”

The future is here today.

(enterprising photoshoppers, please enter “Jewlicious” on the rocket in the photo)