Can there be a more American Jewish name than Milton Friedman? 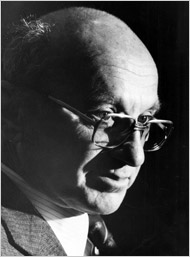 Conservative and liberal colleagues alike viewed Mr. Friedman, a Nobel prize laureate, as one of the 20th century’s leading economic scholars, on a par with giants like John Maynard Keynes and Paul Samuelson.

Flying the flag of economic conservatism, Mr. Friedman led the postwar challenge to the hallowed theories of Lord Keynes, the British economist who maintained that governments had a duty to help capitalistic economies through periods of recession and to prevent boom times from exploding into high inflation.

In Professor Friedman’s view, government had the opposite obligation: to keep its hands off the economy, to let the free market do its work. He was a spiritual heir to Adam Smith, the 18th-century founder of the science of economics and proponent of laissez-faire: that government governs best which governs least.

The only economic lever that Mr. Friedman would allow government to use was the one that controlled the supply of money â€” a monetarist view that had gone out of favor when he embraced it in the 1950s. He went on to record a signal achievement, predicting the unprecedented combination of rising unemployment and rising inflation that came to be called stagflation. His work earned him the Nobel Memorial Prize in Economic Science in 1976.

Rarely, his colleagues said, did anyone have such impact on both his own profession and on government. Though he never served officially in the halls of power, he was always around them, as an adviser and theorist.

Professor Friedman also fueled the rise of the Chicago School of economics, a conservative group within the department of economics at the University of Chicago. He and his colleagues became a counterforce to their liberal peers at the Massachusetts Institute of Technology and Harvard, influencing close to a dozen American winners of the Nobel prize in economics.

A long and interesting obituary in the NY Times. This was a man of influence; a giant (yet not such a tall man) whose ideas were considered, analyzed and often affected policy as well as the work of other economists.