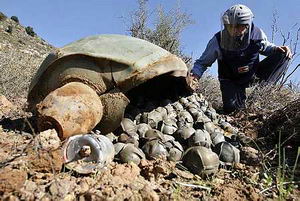 One of the mysteries of the recent war in Lebanon was the use of cluster bombs by Israel. The topic is very much alive because the UN continues to claim that over a million unexploded cluster bombs remain strewn throughout S. Lebanon and because there are many special teams in place to attempt to remove these bomblets which have injured or killed about a dozen people since the war ended. The UN also claims that Israel has not provided detailed maps of where these bombs may have landed.

I suggest that this is because the IDF has no clue.

First, let’s deal with the absurdity of this story. Cluster bombs can be very nasty weapons because they are essentially large containers carrying hundreds of mini bombs that spread out over an area. Use of these bombs is permitted by international law when attacking military targets. However, their impact can be quite harsh and they are therefore considered to be a harmful weapon the use of which is highly questionable. Israel had committed to the US, its supplier of these bombs, only to use them in particular circumstances, and it is possible that they violated these terms in the recent war.

So where is the absurdity? Not only did these US bombs have a failure rate of about 40% (meaning that 40 out of every 100 bomblets didn’t explode), thereby worsening the post-war impact on Lebanese civilian society, but it turns out that the Israeli arms industry was aware of this problem and developed cluster bombs with a success rate in the high 90s. They sell these bombs to armies around the world. But they don’t sell them to the IDF. Why would the IDF not use exceptional, indigenous, fairly prices cluster bombs and instead buy outdated, poorly-performing American cluster bombs? Because Israel receives military aid from the US every year and is obligated to spend 75% of it in the US on American arms. What do they buy? Lousy cluster bombs.

Then Israel goes to war and actually starts lobbing gazillions of these bombs into Lebanon knowing they don’t work well. You think to yourself, they must have had a good reason for this: they wanted to punish the villages that support Hizbullah; they wanted to prevent civilians from returning quickly to these villages after the war; they felt the bombs neutralized Hizbullah operatives during the war; etc. Well, maybe somebody thought that but nobody knows who thought what. Weeks after these stories came out, and weeks after the IDF kept saying that use of all armaments was within international conventions of war, it turns out that the IDF Chief of Staff wasn’t reading newspapers and had no idea they were being fired.

That’s right, the Chief of Staff didn’t know. Or he says he didn’t know. Artillery officers and soldiers are claiming targets came from the offices of the General Staff, not from local commanders. The Chief of the General Staff says he didn’t know. In fact, what he said was that learning about it did not surprise him but disappointed him!!! What?! He knew it could happen but didn’t stop it? He allowed others to dictate such an important part of the war effort? He considers his officers to be little children and he hopes they will perform nicely but if they don’t he’s not surprised just disappointed?

There is now at least one investigative committee looking into this issue and I suspect a couple of the other more broad investigative committees will eventually consider this issue as well. Let’s hope that they come out with a reasonable story about what took place here. Most of all, let’s hope that story is the truth and nothing but the truth. The IDF cannot become an institution that cannot be trusted by the government of Israel or by its citizens. It must be trusted to be a smart, ethical army that will prepare well for Israel’s contingencies and treat its own soldiers with care and concern, just as it will treat its enemies harshly while ethically sparing their non-combatants from harm.

Another story about this.

Yet another story about this.