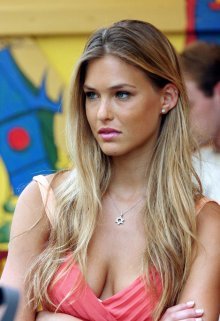 Allison from Israelity and An Unsealed Room reminds us that Israeli model Bar Refaeli may be over-exposed in the marketplace right now. She’s gracing fashion magazines, lingerie catalogues and billboards. She’s also the on and off again girlfriend of the decidedly non-Jewish but hugely popular Leonardo DiCaprio, although at her tender age (early 20s), I don’t think it matters much for the long term faith of the unborn babies. She’s also intensely disliked by many Israelis, apparently because she had a quickie marriage done and then undone to a friend of her parents in Israel presumably because it’s better to be modeling on runways in Milan and Paris than serving in the IDF.

But yeah, I just wanted to post this to prove that she’s over-exposed. I wonder why?