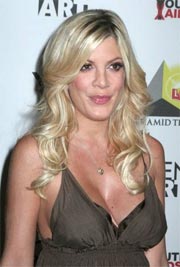 Tori Spelling is in the news today! You may remember her as Donna Martin on Beverly Hills 90210, or as Alex Monday on Scary Movie 2, or from a whole slew of otherwise forgettable films and TV episodes. The 33 year-old actress, also known as the daughter of prolific television producer Aaron Spelling, announced today that she will be writing a memoir to be published in 2008 by Simon Spotlight Entertainment, a division of Simon & Schuster.

Now, I have nothing against Tori Spelling. She’s been acting since 1981. Some of the stuff she’s done has in fact been somewhat important from a pop culture perspective, even if it wasn’t, you know, deep and stuff. As a member of the Spelling household, I’m sure she’s got oodles of great inside stuff to share with a readership who is without a doubt, awaiting the publication of her memoirs with breathless anticipation. But someone has really got to reign in her PR people. There is such a thing as laying it on too thick:

“We all think we know who Tori Spelling is because she has grown up in the public eye, but her book will give readers a chance to know the real Tori – a funny and resilient young woman with a fascinating story to tell,” Jennifer Bergstrom, Vice President and Publisher of Simon Spotlight, said Monday in a statement… According to Simon Spotlight, Spelling “will let readers experience the truly unique life of Tori Spelling – from childhood privileges to tabloid misperceptions, success and regrets, and ultimately her quest to define herself on her own terms.”

And what can we expect from Ms. Spelling? Well, let’s see… uh, remember last week how Britney Spears was caught by paparazzi in a very not tznius pose while exiting her car on the way to a party with her new pal Paris Hilton? Tori had these words of wisdom on what looks to be a new “going commando” trend amongst publicity-hungry female celebrities:

“I don’t think it’s a trend. Sometimes girls just don’t wear panties, and we forget to close our legs when we’re getting out of cars.”