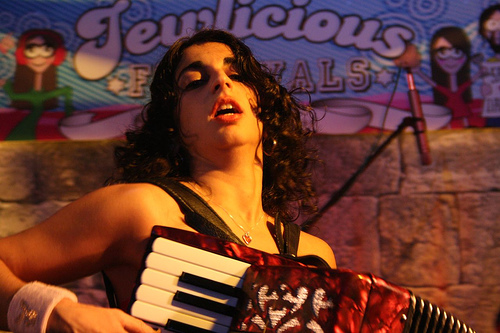 Okay, even as I write Rachel Bookstein is probably serving yet another tasty meal for the many hungry mouths, her indefatigable husband, Rabbi Yonah is probably running around organizing one more event – one last activity. Some people are sitting in corners playing music, others have just left the auditorium after a second night of great performances by a number of different bands. Ariel Beery is probably still trying to figure out how to beat that Shabot guy in Scrabble (give it up dude, the guy obviously read the Scrabble dictionary), Kelsey is presumably having a beer (didn’t see ya on the way out, so take care), others are hopefully getting phone numbers and email addresses from the many attractive (and attracted) members of the opposite sex, Grandmuffti is wondering whether god does exist after all, ck is taking yet some more photos, Laya is relaxing in the cafe, Esther is done introducing bands, and all those who are leaving for home or had left a little while ago are feeling a little different, a little excited, a little more of a sense of belonging to our…tribe, and definitely a little sad that it’s over.

Jewlicious 3.0 was packed and busy and full of activities and fun and lots and lots of young people having a pretty good time. Really, what an incredible event. It’s as if people aren’t just thirsty, but parched for this type of festival where they can connect with others even as they connect to some edgy and fun activities. There were moments last night, particularly when Rav Shmuel was on stage (somebody get that guy some airplay, he is so damned good!) when the energy in the building was explosive.

I’m tired but so very pleased to have been there.

And now listen carefully all you Jewish professionals and benefactors who are interested in reaching out to young Jews: Rabbi Yonah Bookstein and his team, with assistance from David Abitbol (ck on this site) and others like Esther and Laya, have put together a superb template that succeeds wildly in reaching young Jews!! They have done this for three years running, with 100 in attendance the first year, 250 in attendance the second year and while the numbers aren’t in yet, at least 400 attendees this year. This is a proven concept! People came on Friday and remained until Sunday night with a full agenda – almost 24 hours a day – throughout. They met each other, talked through the night, played music, sang songs, ate well, had discussions about all sorts of Jewish and Jewish-related topics, celebrated a shabbat together, enjoyed music from excellent Jewish musicians, bands and poets and truly connected with each other with a sense of belonging to a community.

This is a template that can be reproduced in other places in the US. The costs are not prohibitive at all and the team is experienced (and probably willing). If you are a potential benefactor, CALL Yonah Bookstein and get the ball rolling. If you are a professional that has a mandate to work with students or other young Jews, don’t worry about territoriality, this thing cannot be run without significant local leadership and input. I can think of a number of centers around the country where this event can be replicated with great success. Come on folks, there are young Jews in your area that would love to have this type of event. CALL RABBI YONAH BOOKSTEIN AND GET IT DONE! He can be reached at: rabbiyonah [at] gmail.com. Do it!

Update: Here’s a review of Jewlicious 3.0 by a reporter who was there for two of the three days.