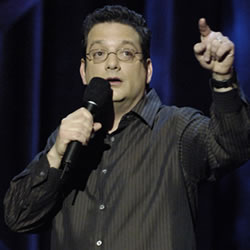 I’m not sure who comedian Andy Kindler knew to get him a relatively steady gig over at Comedy Central, but I want names!! While there are plenty of comedians I don’t find funny, I can usually discern where their humor stems from and who it appeals to. Well, apart from Jimmy Kimmel… Speaking of which, how did Kimmel end up with his own late night talk show and why hasn’t Adam Sandler usurped that position yet? And furthermore how did Kindler land “Letterman”?

After reading about Andy Kindler on Comedy Central and yes I’m only mildly obsessed with its blog, I checked out Kindler’s comics (yawn), read his blog (accessible thru his site), and even hit his None of The Above page seeking some sort of comedic relief in the form of non sequiturs. At the very end of which I was left with these words from his March 1 entry.

Hi friends. It’s March already. Can you believe it? Just yesterday it seemed like February 28. If the Roman Calendar is so great, why is one month out of whack? If the Romans were so fantastic, they would still be in charge. Obviously I know nothing about calendars or history or anything, but that doesn’t stop me.

Things are really picking up. I sold all of my winter inventory, and am getting ready for the spring line. My chain of fast food cold cereal restaurants are spreading like things that spread. Stay tuned for more fake announcements. If you can’t stay tuned, join the club. The out of tune club.

So I’m assuming this blurb from his April 2 post about his “secret” falls in the realm of fake announcements, but I’ll post it here anyways:

Soon I will be releasing the Comedy Secret. Do you want to be a world famous comedian? Just close your eyes and say over and over to yourself: “I’m hilarious. I’m hilarious.” Now visualize yourself performing your act in front of thousands of people in an inappropriately huge stadium. The crowd is laughing uncontrollably and slapping their knees. You must have just told a knee slapper. Now write yourself a check for ten million dollars and stick it in your pocket. Don’t cash it yet. You don’t have sufficient funds. Then go enter a “Last Comic Standing” type contest, and wait for the money to pour in. If it doesn’t pour in, give up.

I enjoy “Last Comic Standing” way too much to qualify this last statement. I will say this though: Kindler’s comedy has me starting to believe that Dane Cook might actually be funny even if the majority of his routines are simply aimed at appealing to the lowest common denominator.