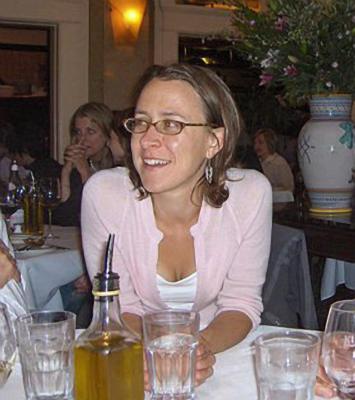 Okay, when I post these stories, Michael wants to die and Phoebe wants to puke. However, this one has a twist because it involves one of America’s largest fortunes.

Apparently, Sergey Brin, co-founder of Google, has just married his long-time sweetheart Anne Wojcicki. Both bride and groom are 33 years old and from what I can tell seem to have some links going back years. It seems that Anne’s older sister, Susan, a VP at Google, had rented to Sergey and Larry Page the garage in which they founded Google. Some time later Susan introduced Anne to Sergey and…blah blah blah…Mazel tov!

The couple had a private wedding on an island in the Bahamas and will live in Palo Alto. Google has just invested 4 million bucks, along with some other investors, in a start-up headed by Anne called 23andMe that will try to enable people to collect genetic data about themselves. Yuck! But we’ll ignore the notion of a world where Google can track every move you make on the Internet while a Google sponsored start-up learns everything there is to know about your genetic makeup because…this is a love story.

According to Top SEO blog, which got the story from Mercury News, Eugenia Brin, Sergey’s mother, mentioned in a 2001 interview that she hopes Sergey will find someone who’s got wit similar to his and who is hopefully Jewish as well. Anne is considered quite bright and if interviews I’ve heard with her sister are any indication, super-bright. And she’s Jewish. Her father is a Stanford physics professor with 3 daughters, while Brin’s father is a mathematics professor in Maryland and his mother is a research scientist (they arrived in the US from Russia when Sergey was 6 years old). Of course, this bodes well for assistance with homework their potential children will be getting at home.

This story is receiving media coverage for an obvious reason: Google’s phenomenal success and Brin’s resulting wealth. He is worth somewhere between 14 and 16.6 billion dollars as of this writing. Well, money isn’t everything (although if Sergey would like to share, oh, about 0.1% of that wealth with me, I wouldn’t object and neither will my wife) and marriages need foundations far stronger than money to thrive. Without knowing the couple, it seems this is the case here. May the couple enjoy a fun, happy, fulfilling life together and hopefully it will include children and maybe also a connection to their Jewish heritage.

Update: Bnai Brith Magazine, of all place, did a story about Brin and Larry Page (whose mother is Jewish and whose father was an early founder and resident of the town of Arad in S. Israel). It gives some detail about Brin’s family’s decision to leave Russia.

Update for May 29: The NY Times has finally reported on this story (with a much better photo) and gives a good deal more information about Anne. Her father is the chair of the Physics dept. at Stanford and her mother, Esther, is a journalism teacher in a high school. Anne earned her biology degree at Yale where she was a competitive ice skater and played on the varsity hockey team. Her new company has raised ten million dollars in start-up capital and she co-founded it with an experienced life-sciences entrepreneur.