There isn’t conclusive evidence at this time but the timing seems awfully suspicious. It appears that just prior to the gay pride parade which was held in Jerusalem with relatively few incidents, a number of fires were set in forests surrounding Jerusalem. A couple of these, “Eshtaol forest, west of Jerusalem, and another fire near Beit Shemesh,” are still not under control.

Also, “City resident Gil Shiloh said that he noticed four fires near the Valley of the Cross, in central Jerusalem, and heard people praying in the background.”

I should note that prior to this parade, while voicing strong opposition to the parade itself, a number of prominent rabbis publicly and responsibly requested that the ultra-Orthodox public refrain from taking any violent steps in their protests against the parade. Despite this possible arson and one guy who was caught with a small pipe bomb, for the most part it seems they were heeded and the protesters expressed their opposition without violence. This makes sense since a bunch of colorful balloons should make people happy, not angry. 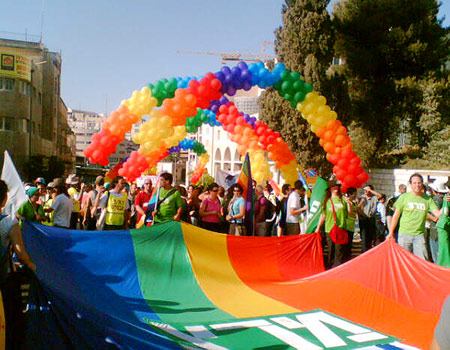