Another day, another fine photo by Rina Castelnuovo 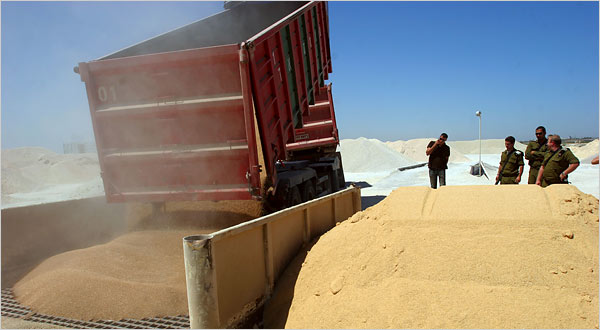 The article by Isabel Kershner is about the antiseptically pragmatic movement of food and medical supplies into Gaza from Israel despite both governments’ opposition to recognizing each other.

For the past month, since the Islamic militants of Hamas took over the Gaza Strip, Israel has kept the main commercial crossing point at Karni shuttered, squeezing the life out of the limp Gazan economy. Israel bans contact with Hamas, and Hamas seeks Israel’s destruction, making border crossing etiquette more precarious than elsewhere.

Yet at this small crossing near the Egyptian border on Wednesday, between mortar attacks by Hamas and other militants, about 20 truckloads of milk products, meat, medicines and eggs passed from Israel into Gaza, part of the effort to keep basic commodities reaching the 1.5 million Palestinians of the largely isolated strip. Most of the supplies are not humanitarian relief, but are ordered by Palestinian merchants from Israeli suppliers, relying on contacts built up over years.

The mechanics of the crossover manage to answer Israel’s security needs while avoiding contact with Hamas. At Kerem Shalom, Israeli trucks transfer their goods to what Israeli military officials describe as a â€œsterileâ€ Palestinian truck. Driven by a carefully vetted Palestinian driver, the truck never leaves the terminal, carrying the goods to the Palestinian side, where they are transferred onto ordinary Palestinian trucks that drive into Gaza.

I thought I read last week that Hamas banned all produce purchases from Israel. I guess not.

Isn’t it strange that commerce goes on even as the mortar and Qassem attacks continue?