Until I attended the Dead Sea Scrolls exhibition in San Diego, I had never heard of David Harris. There is a photography gallery on the top floor of the museum which includes the work of some photographers like Neil Folberg, Dubi Tal and David Harris. A number of Harris’s photos were historical in nature and very interesting.

According to his CV, Harris has spent many years of his life as a professional photographer in Israel. For 1961, he lists Special assignment as head photographer to the Judean Desert excavation, Head of expedition prof. Y. Yadin. Trying to find out what Yigal Yadin was doing then was challenging but Google brought up the Israel Antiquities Authority Website which describes the excavation as a survey of the Judean desert.

Thanks to the inexhaustible energy of J. Aviram, the director of the Israel Exploration Society (both then and now) and the connections of Professor Yadin, the survey project of the caves in the southern Judean Desert was undertaken in 1960 and 1961. Ben Gurion was convinced of the importance of the endeavor and instructed the Israel Defense Force to lend its full support to the success of the project. Four expeditions led by Professor N. Avigad, Professor Y. Aharoni, Pesach Bar-Adon and Professor Y. Yadin carried out the survey and it was not long before numerous finds were revealed. In a cave in Nahal Se’elim they uncovered many papyrus fragments and an ancient tefillin scroll; in Nahal Mishmar the hoard of copper implements dating from the Chalcolithic period was found; In Nahal Haver, the Cave of Horrors was excavated where many artifacts were discovered dating from the time of the Bar Kokhba uprising, including numerous skeletons that belonged to the last of the rebels; in the Cave of Letters located in Nahal Haver, scroll fragments were uncovered, but by far the most important find from there is an archive of the residents of Ein Gedi that included a packet of fifteen documents of Bar Kokhba and the personal letters of Babata Bat Shimon that have contributed so much to our understanding of daily life in southern Judea and Transjordan during the period between the two revolts. And finally, in the extensive excavations conducted by Professor Yadin on Masada, they discovered scrolls in the different excavation areas, among them parts of the Books of Genesis, Leviticus, Chronicles, Ezekiel, Psalms, the Ben Sira Scroll, the Thanksgiving Scroll and the Book of Songs of the Sabbath Sacrifice.

One of the scrolls at the exhibition was of a contract from the Bar Kokhba era and while I wouldn’t swear to it, I am pretty sure I saw signatures on it below the contract script. David Harris was the official photographer for the survey which would have discovered that scroll.

As Harris’s website shows, he has captured some seminal moments in Israel’s history and when I saw one of them in the gallery (I don’t recall the price), I immediately thought about posting it here one shabbat. 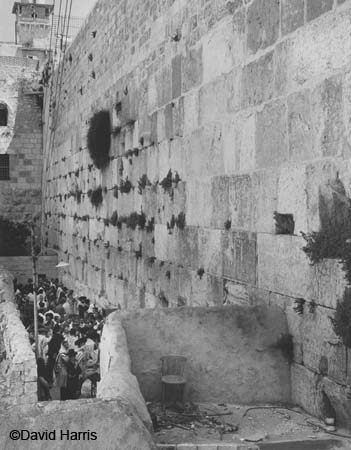 This amazing image shows the first shabbat at the Western Wall after the 1967 War ended. The Jordanians who had controlled the Old City since 1948 lost it in the Six Day War to the IDF. In 1948 the Jordanians and Palestinian units fighting alongside them conquered east Jerusalem and the Old City. The remaining Jews, of what had been less than half a century earlier a Jewish majority, were evicted from the Old City and east Jerusalem. Through 1967 not a single Jew was permitted to enter east Jerusalem and therefore none had access to the Western Wall, just outside the holiest site in Judaism.

This photo shows the first shabbat since 1948 when any Jews would have been able to visit, see or pray at the Western Wall since the War of Independence. From my research on the ’67 War, I have to think that prior to the War, most young Israelis wondered whether they’d ever see the Western Wall in their lifetimes and older Israelis probably thought they would never see it again. This photo was taken about 40 years + about 6 weeks ago. 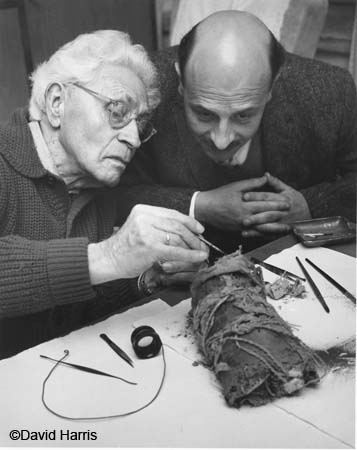 The second image by Harris I discovered by browsing his site. I find it interesting not because Yadin was balding, but because it shows Yigal Yadin with what I am guessing is a wrapped scroll before they opened it. This is probably taken around the time of the survey in 1961. For all we know, this could be one of the Bar Kochba era documents.