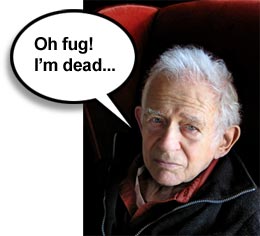 So what of the Jewish identity of the man who died on the 32nd anniversary of the passing of the “Zionism is Racism” resolution by the UN General Assembly? Well, he’s been everything from ambivalent and ignorant to grudgingly respectful. He’s been quoted as saying “I am very Jewish … I have a Jewish temperament, I have a Jewish mind … I am inquiring and fascinated with the dialectic, fascinated with argument, counter argument and the argument that comes out of the counter argument … I am not at all pious, I am superstitious so to that degree I am a little bit of an orthodox Jew but not at all in that I am not close to the ceremonies and I am in no way a formal Jew but in every way I consider myself Jewish.” In a podcast interview with NextBook, he spoke reverentially of his Rabbinically trained Grandfather, but then stated “The fact that I was a nice Jewish boy from Brooklyn held me back… There was nothing sufficiently ruthless in me was the way I saw it at the time… ”

He nonetheless stated that being Jewish played an “enormous role” in his being a writer. His last novel, The Castle in the Forest,” was a fictionalized account of Hitler’s early years, narrated by one of Satan’s demons. Ruth Franklin at The New Republic said that it was a “superficial, twisted, and finally just plain stupid vision of Hitler.” The Times concluded that “Regrettably, some of the flicker of intellectual excitement caused by such a novel concept is extinguished by the novel itself.” while the Toronto Globe and Mail‘s review opined that “This is a Norman Mailer book, which means it’s grandly ambitious, another wild swing at the fences, another long, loud, foul ball.” Janet Maslin of the New York Times said that Mailer’s conclusions “turn out to have caca’s subtlety. With 467 pages of repetitive text, this is a big book with a jarring incongruity: its thinking is so small.” The book received many very positive reviews, don’t get me wrong. But what was missing from the book that occasioned the negative reviews cited?

Back to the Nextbook interview, Mailer admitted that his novel never addressed the Jewish issue – this would be something for a future book, because a Jew writing a book about Hitler that addresses Judaism? That’s just crazy, right? Anyhow, this omission was probably a good idea given Mailer’s really flawed concept of Judaism:

The great evil that Hitler did us apart from the Holocaust itself is that he deadened the Jewish mind… all too many Jews now can think of nothing but “Is this good for the Jews?” They have a built in reflex. The moment that anything bad happens that is slightly unfavorable to the Jews, they panic, and we’re not here for that. We’re here to do all sorts of outrageous thinking if you will but certainly incisive fine thinking. If the Jews brought anything to human nature it’s that they developed the mind more than other people did. It was extremely important for them to develop that mind, and to deaden it and stultify it, to flood it with cheap religious patriotism. I consider that part of the disaster that Hitler visited upon us.

And on the recent rise of global antisemitism?

I think we’re partly responsible for it, for this cowardly, panicky reaction all the time… the moment something is bad for the Jews we panic and I find that’s awful.

We’re responsible? Really? Oh gosh. I like to think that if it’s bad for the Jews, it tends to be bad for a lot more other people too. I’m thinking Hitler, Stalin, terrorism, Mullahs with nukes, intolerance, stuff like that. But I’ll shut up now lest the cheap religious patriotism I share with Mailer’s grandfather inspires someone to be antisemitic – especially today, the 69th anniversary of Kristallnacht no less!

Don’t get me wrong. I like Norman Mailer. Over the years he’s made me think a lot; his death is indeed a tragedy and a loss to the world of letters. It’s too bad he never visited Israel, too bad he was never truly at peace with his Jewish identity. Age gives you wisdom and had he lived a little longer and come to terms with who he really was, he might yet have given us that great American Novel.

Arrangements for a private service and burial for family members and close friends will be announced next week. I wonder, who is going to say Kaddish for Norman?

** More on Mailer’s Judaism from the Forward: â€œMany years ago, I received a translation of the Talmud as a gift, and I have been dipping into it on and off ever since; it has influenced everything I have written.â€