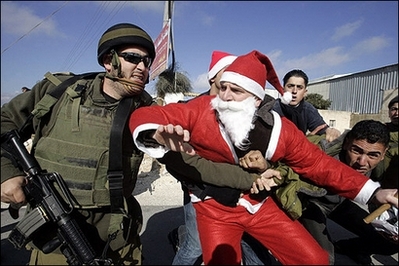 The Palestinians may have proven themselves to be entirely incompetent when it comes to building a state, but they are the world’s best at propaganda. Here we have THE Santa being arrested by Judas types. If you are a Christian and your kids don’t receive any presents from Santa this Christmas, blame it on the Jews. Here is the ridiculously biased “reporting” accompanying this ridiculously biased “journalistic” photo:

An Israeli soldier tackles a Palestinian protester dressed as Santa Claus or Father Christmas during at a protest against Israel’s separation barrier in the village of Umm Salamunah near the biblical West Bank town of Bethlehem. Israeli guards beat five demonstrators during the protest on Friday, organisers said.
(AFP/Musa al-Shaer)

Obviously, there are no such problems in Southern Lebanon. As the photo below shows, Santa loves Arabs. He especially loves them if they are fundamentalist Islamists like Hizbullah who like to launch rockets at Israeli civilians. This is a Reuters photo (they also covered the Palestinian Santa above) taken in Southern Lebanon – Hizbullah’s home base. 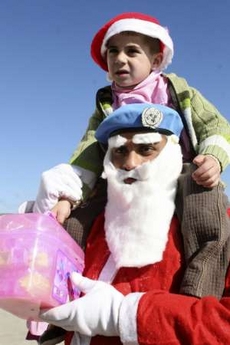 December 25 update: Santa did arrive! No worries for the Jews this year.