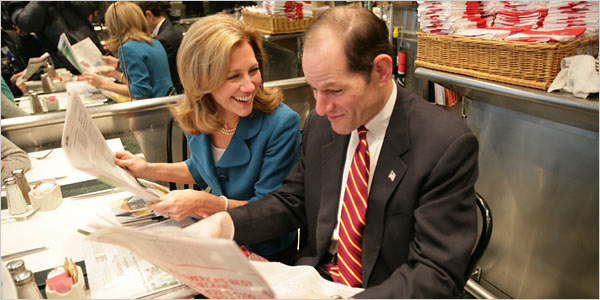 One of our commenters suggested the entire Spitzer fiasco was the fruit of a Republican move against a strong Democrat. It may be that the conspiracy theory has some legs. It appears the Justice Department used extensive resources in tracking and gathering evidence against Spitzer, including the use of an FBI team to follow him on a trip to DC when he did not meet a prostitute.

It is quite unusual to use this level of intrusion in an investigation related to prostitution but for Spitzer, little expense was spared.

The Justice Department used some of its most intrusive tactics against Eliot Spitzer, examining his financial records, eavesdropping on his phone calls and tailing him during its criminal investigation of the Emperor’s Club prostitution ring.

The scale and intensity of the investigation of Mr. Spitzer, then the governor of New York, seemed on its face to be a departure for the Justice Department, which aggressively investigates allegations of wrongdoing by public officials, but almost never investigates people who pay prostitutes for sex.

A review of recent federal cases shows that federal prosecutors go sparingly after owners and operators of prostitution enterprises, and usually only when millions of dollars are involved or there are aggravating circumstances, like human trafficking or child exploitation.

Very nice. The guy went to a prostitute so they needed nothing less than FBI teams tracking him. It may be related to homeland security since the prostitute might blow herself up and damage the hotel room’s wallpaper.

Several current and former federal prosecutors and prominent defense lawyers who reviewed the document said the inclusion of such salacious details about Mr. Spitzer’s encounter with the prostitute went far beyond what was necessary to provide probable cause for the arrests and for searches, the purpose of the affidavit.

The government has not accused Mr. Spitzer, a Democrat, of any wrongdoing, although last week the top federal prosecutor in Manhattan, Michael J. Garcia, issued a statement saying there had been no deal with Mr. Spitzer’s lawyers, suggesting that a prosecution of some kind might still be a possibility.

I don’t see what they are waiting for. Clearly they could interrogate Spitzer if they really want to find some sinister crimes here. Who knows, with a little luck, perhaps the new Attorney General, Michael Mukasey (Jewish) may yet have to testify before Congress as to why Spitzer was interrogated using waterboarding. Getting to the bottom of his sex life is clearly of paramount importance for the country…

The photo at the top, now a sad statement more than anything else, is a James Estrin photo for the New York Times showing the happy couple, Eliot and his accomplished, beautiful and successful wife, Silda, after they voted on election day. Spitzer won.