Calm – Sea of Galilee, the Kinneret 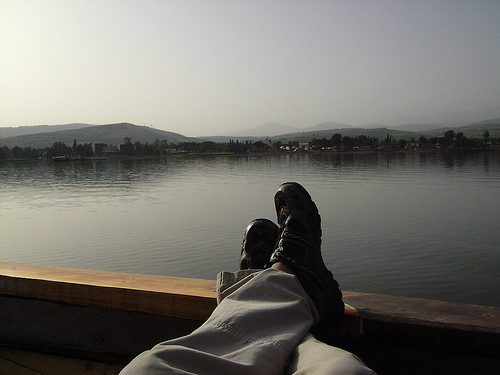 James Traceur captured that image while traveling in Israel.

This was an interesting week. Jimmy Carter went to talk to terrorists claiming that you had to include them in any discussion. He didn’t say how he planned to overcome their stated plans to destroy Israel, or to fine tune their opening negotiating conditions which are that only after Israel moves to 1949 lines (so-called pre-’67 lines), will the Palestinians agree to begin negotiations…as to how the Palestinians can move into Israel. No One member of the Israeli cabinet met Carter on his visit and he was also received by Shimon Peres, Israel’s President. This is the American President who brokered peace between Israel and Egypt and the Israelis will not talk to him. They happen to be right, he has so maligned both Israel and American Jews with his recent book and the book’s promotional dog and pony show, that it’s hard to know what there is to discuss with him.

—
Passover is upon us in yet another year. 2500+ years of celebrating this holiday and elements of the original still remain, as well as newer elements (that is, those that began appearing about the time of the Mishna, so maybe 1800 years ago?). There’s always plenty of food, plenty of family, and the knowledge that we did this last year and will do it again next year. Another thing that’s nice is that every time I’ve seen a seder outside of my own home, they’ve all had unique touches, some going back three, four, five generations. I was once at an Iraqi family’s seder where I thought I had gone back in time 1500 years. I think we got to the food at 1 AM or something crazy like that.