Israel, Not a Travelogue 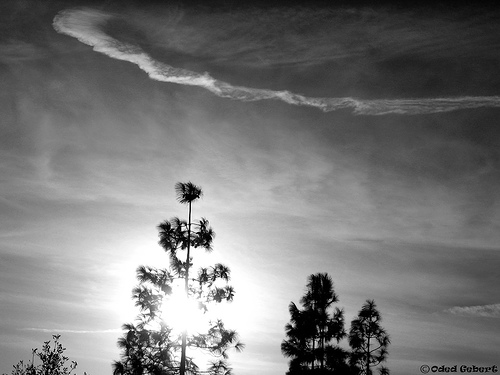 (This post was cross posted from 60 Bloggers where it is one of the 60 posts being published in commemoration of Israel’s upcoming 60th “birthday”).

The Middle is one of the earliest contributors to Jewlicious.com where he continues to post when the mood strikes him. He won’t tell us whether this is an autobiographical piece.

Once upon a time a young man stepped off a plane in Israel and walked on the tarmac towards an outmoded airport terminal. It was afternoon in early summer and the heat had already broken. Around him were tourists and Israelis, his fellow travelers from far away. None had kissed the ground upon disembarking, but many had clapped joyously when the plane had touched down. Off in the distance, the young man could see squat, rocky hills. The sky above was blue; a little bluer than he’d ever seen, as if the sky was closer to the ground than in other places. The young man breathed in the air, squinted up at the sky and, a little surprised at his realization, thought, “This is home.”

On that first day in Israel, he took the bus to Jerusalem. The road to Jerusalem still had the vehicle skeletons from 1948 lying by the side of the road, purposely evoking the war of sacrifice that culminated in the creation of Israel. Watching these metal carcasses, the young man became aware that there was something special about this place. The hills, the trees, the historic climb up through the hills to Jerusalem; it all resonated with him.

He looked around him at the other bus riders. Nothing here was simple, he’d learn, even a bus ride. The people riding alongside him were a diverse mix. There were lined faces of elderly Moroccan women, young faces of wild-haired blonde teens before military service, some Arab students, an Arab laborer, two middle-aged Russian couples that, judging by clothes, had not yet integrated into Israeli life, and a couple of Scandinavian girls in skimpy clothes.

There were also riders who wore IDF uniforms and carried guns. This was the first time he had seen guns in public outside of a policeman’s holster. The Scandinavian girls’ dress distracted him from concentrating on the guns that day. Later on, seeing guns and uniforms became commonplace for him. He would come to accept as normal the soldiers with their guns, young muscular men with sharp faces and tired eyes, and would respect their commitment to serve their country at personal risk.

That first bus ride would always return to him. The hodge-podge of national, ethnic, cultural, economic and religious backgrounds, would re-appear everywhere in the young man’s travels in Israel. The mix of accents and languages on the streets and in the shops exposed the multi-national and multi-cultural flavor of the place. The food he ate also reflected this incredible mix. One could go to a tired old place such as the old central bus station in Tel Aviv and within several blocks find dozens of national cuisines superbly represented in a range of mom and pop restaurants. The mom and pop were always warm and cordial, and the food was usually good. The accents, the homeyness, the sighs of “What can we do, this is the only Jewish state, our only home.” This was the fabric of this place. It was part of what made this place “home.”

Others who had been to Israel told the young man they shared his feelings about it being home but their reasons were different. Israel appeared to be many things to many people, even if it often touched them deeply enough to be a place of personal comfort.

But innocence is always lost with the passage of time. Months after arriving, the young man would discover the funny, perspicacious writings of Yonatan Geffen. This was writing that managed to depict the uniqueness of Israeli society, warts and all, in a homey way, as if everybody were part of one big family, even when criticizing the warts. It was writing that typified how the people of the country viewed themselves. They saw themselves as special, maybe fulfilling a destiny, but they could also recognize how reality managed to violate their magic realism and laugh about it. It opened a window to the cynicism many Israelis felt about their society.

Perhaps if the young man had grown up, like Yonatan Geffen and most Israelis, hearing that 1948 was a tragedy for the Palestinians, instead of just a victorious war of pain and heroic sacrifice that resulted in the destroyed vehicles by the side of the road, he might have viewed that first day differently. Or subsequent days.

But it wasn’t that way at all, because the way he saw Israel that first day was the way many who love Israel view it: through a prism of romantic or perhaps naive appreciation and passion. Every hill is a wonder, every stone has historic meaning, the smell of night hearkens back to ancestors walking this land thousands of years ago, the activity of day or a simple walk through a neighborhood in Jerusalem reminds one of centuries of Diaspora Jews going about their lives preserving traditions, working hard and remembering and passionately commemorating Judea and Jerusalem.

The idea of God suffuses many corners in the country. For most, Arab and Jew, nothing in Israel is what it seems because behind every object and every person there are layers of depth. Layers of time, memory and faith. It is a rich patina that penetrates every surface and every person. It is wondrous. It is also the glue that bonds so many to this Land and People.

And then there are the contemporary real-world flaws of society: corrupt or weak politicians, banana-republic style jobs for the well-connected, imbalance between classes and ethnic groups in Israeli society, the challenge of making a living in this developing nation, having to serve in the army or send your children to serve, and wars.

Wars and terrorism. There were bombings. The young man would visit Jerusalem when terror attacks were frequent. One night, close to the apartment where he was staying, the calm afternoon was shattered by a loud explosion. The terrifying boom wasn’t too far away and the young man ran out to the street. Others gathered and the neighbors knowingly guessed where the bomb must have exploded. A short while later initial news reports reported a suicide bombing with victims. Jews had been murdered, or burned up in flames, or filled up with shrapnel.

And there, just like that, was the other feeling that one often carried in this special country. Fear and dread. Was it safe to enter this restaurant or bus? Was it safe to walk through this part of town? Is that man over there looking at me with hate in his eyes, or is he just tired from the journey he must now make to see his family across a Swiss-cheese border?

They blend, the romantic, innocent view and the jaded, troubled view that acknowledges the imperfection of the situation. That’s the success of terrorism when it is fighting a country that teaches the mythology of its founding as a great victory. The terror forces fears to bubble forth, and it forces the acknowledgment that there is another side to the story, a side with their own truth and romantic views.

And therein lies a dichotomy. The rich beauty of Israel is true – its many achievements in culture, democracy, judiciary, music, architecture, economy, technology, warfare, publishing and so forth. It is also true that Israel is a success as a place of refuge for the Jewish nation, a place for the in-gathering of so many Jews, many of whom are refugees who came with nothing from many far-away lands. This truth feeds the innocent and romantic view of the country, even among its most jaded residents.

But the deep pain of Israel is also true – the war is interminable and the other side has had some legitimate claims even if they use illegitimate means to propagate those demands. The terror has the effect of turning the Israeli nation into a nation of mice seeking to avoid the side of the cage with the electric shock. Except that in this laboratory, the mouse has an army and the means and character to punish those who test him. This strange mix of power and fragility, of control and exposure to harm drives another combination that rests uppermost in the minds of many Israelis and their supporters: pride in the strength of its sons and their army; and, concern about their sons’ safety as well as concern that this strong army will overstep its boundaries and violate the country’s guiding principles of Good.

The young man ultimately chose to live away from Israel, despite his feeling that it was home. It wasn’t intentional, sometimes life pulls in certain directions and people find themselves living something that differs from their vision. He missed Israel a lot and then at times he didn’t miss it at all. All innocence is betrayed and his was no different. Would he want to serve in the army or do reserve duty when people who may not have any talent beyond political survival made decisions about sending soldiers to war or battle? On the other hand, how could he not serve when the country made so many serve and when he believed in the justice of their fight?

But now he was far away and the distance amplified his feelings. The young man often thought that he was cheating himself by choosing something other than what he had felt only in Israel: a fullness of being, a permanent sense of living in this rich place full of history and warm people, of speaking and reading in a language that evoked the memory of ancestors from thousands of years past, of opening a window in a small apartment only to find the fresh scent of spring and blooming flowers fill his nostrils. Eau de Jerusalem Ancien.

The young man, living far from Israel, would sometimes think back to a trip he made after he had lived in the country for a while. A visitor invited him to drive through Israel over a number of days, making stops in the Galilee, at the Kinneret, in the Jordan Valley, at Hod Ha’Sharon and Raanana, in Tel Aviv, in Beersheva, in the Negev, in Eilat and in Ein Gedi. He knew the trip could have been completed in one day, maybe two, because the country is so small. They did it over several days. From this, the young man came to learn how the small size of the Land only enhanced the meaning of its every part. Details take on a greater significance in Israel, a small place that bears so much history and faith that its size is magnified. A similar journey in his home country where distances allowed people to drive for days before reaching a border might have been beautiful, no less than a trip across Israel, but the feeling would have been different. It might not have been as rich or fulfilling. This driving trip took place in winter and the sky was often either cloudy or covered in morning fog. Moisture weighed heavily in the air, hinting at violent storms to come. But to the young man, the scent of rain seemed refreshing and the clouds in the sky awfully close. Closer than any clouds he had ever seen.