James Inhofe and Allah: How did this man ever become a US Senator? 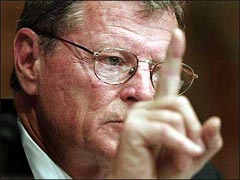 Mr. No Global Warming and No Allah!

You gotta love Republicans. Sen. James Inhofe (R, Okla.), the ranking Republican on the Environment and Public Works Committee and a leading skeptic on global warming, announced on the Senate floor yesterday that he will filibuster President Obama’s first nominee to the federal bench, Judge David Hamilton. Why? Because Inhofe took umbrage with Hamilton’s judgment in the case of Hinrichs vs Bosmah where it was decided that “Jesus” could not be used in opening prayers at Indiana’s House of Representatives, but in theory, “Allah” could be used in entirely non-sectarian prayers.

The Arabic word “Allah” is used for “God” in Arabic translations of Jewish and Christian scriptures. If those offering prayers in the Indiana House of Representatives choose to use the Arabic Allah, the Spanish Dios, the German Gott, the French Dieu, the Swedish Gud, the Greek Theos, the Hebrew Elohim, the Italian Dio, or any other language’s terms in addressing the God who is the focus of the non-sectarian prayers contemplated in (US Supreme Court case) Marsh v. Chambers, the court sees little risk that the choice of language would advance a particular religion or disparage others. If and when the prayer practices in the Indiana House of Representatives ever seem to be advancing Islam, an appropriate party can bring the problem to the attention of this or another court.

So Inhofe is mad at Hamilton for a judgment he made which relied on a previous ruling of the US Supreme Court. Inhofe also finds it offensive that Allah can be invoked in prayer but not Jesus, neglecting of course to note that Allah is just the Arabic word for God, and that a similar use of Muhammad would also be banned. How exactly did this man become a US Senator?? Can I be a Senator too please? Apparently we will soon be hearing rumors that Judge Hamilton is a secret Muslim, just like President Obama!!

Sigh. Read Attorney Ian Millhiser’s article on the issue at the Huffington Post.