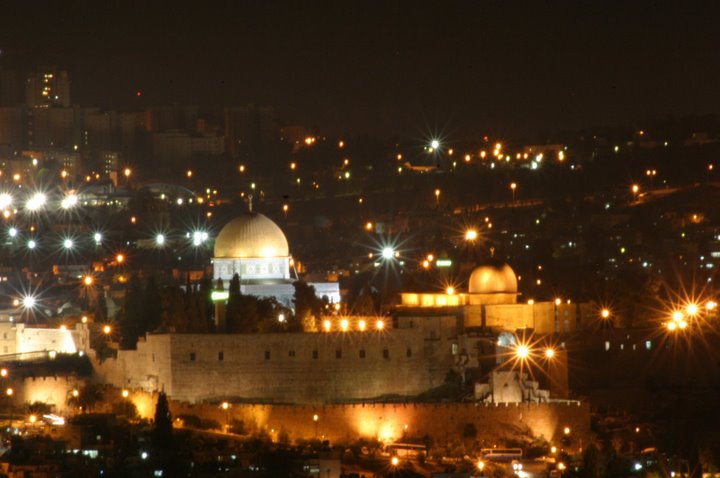 Yair took this photo of nighttime Jerusalem as seen from Armon Hanatziv where the beautiful Jerusalem promenade overlooks the city (I lost the link and don’t know Yair’s last name, so if you happen to know Yair, please send me the link).

This week has been a nothing week. Nothing to report because we don’t really know what happened between Israel’s PM and the President of the US.

On other fronts, however, the news is somber. Jewish day schools are closing or in serious trouble, Jewish overnight and day camps are seeing drop-offs in campers, a variety of Jewish charities of all sizes are experiencing severe difficulties and are either closing, laying off staffers, teachers, principals and even their clients who are receiving fewer services if at all. Decades of infrastructure that has provided services to the Jewish community in the USA, Canada and to some degree Israel are coming apart before our eyes.

The problems are many. Wealthy individuals who have been living off their investments and trust funds have found their assets halved and sometimes worse. They aren’t able to live the same way or give as they have in the past. Charities with funds that were directly or indirectly invested with Madoff are essentially broke or bereft of funds. Active businesspeople are wondering whether their businesses can survive and have had to curtail charitable contributions and other forms of support they may have provided in the past.

It is already hurting and will hurt even more.

But there’s a silver lining, in my opinion.

There is going to be some pain for a while, but out of this we will evolve into a much leaner community that can do as much with less. There have been numerous redundancies in the Jewish charitable world as every Sam, Adam and Harry decided to fund their pet charity. As a result, charities were fighting over scarce resources and frequently stepping into each other’s domains. That has enabled an entire cadre of professionals to work as employees and has bloated organizations to a degree that may have been unnecessary.

Now, as some of the weaker charities die and the survivors learn to provide the same services with fewer dollars and fewer employees, Jewish benefactors will also become much more prudent and choosy about their giving. As a result, the best and most important charities will survive and those whose mission may be peripheral will not.

However, what I really hope for is that all of this turmoil will lead to one result: more giving to education.

If you are a benefactor to charities, an officer of a key Jewish organization (i.e. Federation) or someone who operates a charity, consider the importance of this issue. Instead of supporting some Jewish professionals, funding another university building that carries your name, supporting some Jewish political or social movement, giving money to Israel which last I heard had a government that was far richer than our Jewish community, or giving money to an organization that ultimately only benefits a small number of recipients, consider an alternative.

Consider that this money could and should go to a Jewish Day School, afternoon/Sunday school or summer camp. In doing so, you will be providing the lifeblood this community needs to survive well into the future. You will be ensuring that Jewish traditions, values, history and our shared heritage are passed on to our youth and college students. You will make a truly relevant contribution so that your children and grandchildren will have a sizable and vibrant community to live in and with. You will be ensuring the future.

Really, it’s insane that they’re asking Jewish families to pay $15,000-$20,000/year to send children to school, $5000/month for summer camp and providing few services to campus students. Everybody except for the richest and the poorest members of the Jewish community are forced to make impossibly difficult choices if they can find the funds to pay. This is where funds are needed. Your local museum needs a new wing? Give the money to a Jewish school. Your local classical symphony needs a few million? Listen to CDs and give your money to a summer camp with a demand they subsidize their programming. That university president keeps bugging you about that new building program he’s developing? Fund a chair that will benefit Jewish students and use the remaining money to ensure the sunday/afternoon schools can offer excellent classes for free to their students.

There is nothing more important as far as the needs of our community are concerned.