Gordon St. and the Beach in Tel Aviv Shabbat 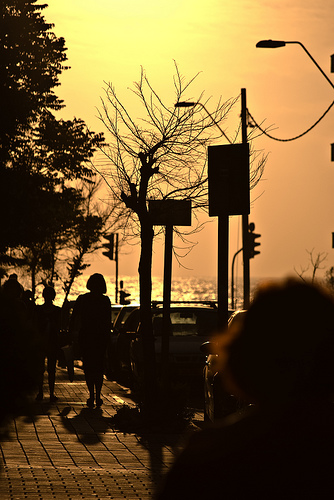 The beautiful image is captured by Shay Tal.

Not much to report this week. The Israelis removed some outposts to show Obama they respect him. Abbas came to visit Obama and proceeded to admit to a reporter that he planned to do nothing any time soon, and by the way, he had passed on an amazing offer of a state when Olmert was prime minister just because.

The economy is improving a little but still very sluggish. We are about to witness the formerly largest auto manufacturer in the world, an American mainstay for several decades, finally go bankrupt after sucking up a few tens of billions in taxpayer money. And don’t fret Matilda, there’s going to be more money poured into that sinkhole before we’re done.

Paul Krugman believes that inflationary pressures are minimal right now and has essentially called the Republicans a party of clowns for their extremist obstructionism in the House and in California. It is reported that Republicans weren’t too offended, they were busy sifting through everything Judge Sonia Sotomayor has ever said or written. For some reason, they don’t mind when ideologues of the Right like Alito get appointed to the Supreme Court, but heaven help America if it’s a middle of the road Democrat or liberal. Before her appointment, the bets were on some other female jurists including a couple of Jewish ones. Ruth Bader Ginsburg will probably have to leave the bench soon because of her reported medical condition.

In other news, I was reading an article in Fortune Magazine about Intel. They were discussing two key projects that Intel is developing with substantial budgets (billion dollar+) and is betting the company on these technologies. The two names that were mentioned as leaders in this endeavor were Israeli or Jewish or both. Yoeli and Singer, female and male respectively. She helped develop the Pentium 4 in Israel’s Intel operation and was apparently plucked out to lead a large team out here. It’s impressive, but it’s also reflective of the brain drain plaguing Israel.

Then again, it’s quite amazing how many people of this quality Israel produces and continues to produce. Now if they could just get rid of some of those former generals and soldiers and let the geniuses run the place for a while…