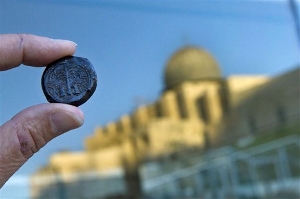 While digging wantonly under Al Aqsa Mosque, Islam’s 3rd holiest religious site, the Zionists usurpers conveniently claim to have discovered a trove of approximately 70 allegedly Jewish coins dating from the time of the 2nd Temple – you know, the one that never really even existed?

About 70 coins were found in an excavation at the foot of a key Jerusalem holy site. They give a rare glimpse into the period of the Jewish revolt that eventually led to the destruction of the Second Jewish Temple in A.D. 70, said Hava Katz, curator of the exhibition… The Jews rebelled against the Roman Empire and took over Jerusalem in A.D. 66. After laying siege to Jerusalem, the Romans breached the city walls and wiped out the rebellion, demolishing the Jewish Temple, the holiest site in Judaism… The coins sit inside a glass case, some melted down to unrecognizable chunks of pockmarked and carbonized bronze from the flames that destroyed the Temple.

Hava Katz is SUCH a liar! So she scorched up a bunch of coins. So what? Everyone knows that there was no temple in Jerusalem 2000 years ago because all the Jews where in Khazaria. And they weren’t even Jews yet. This is just another provocation by the Zionist Apartheid regime meant to justify their destructive digging under Haram Al Sharif which threatens the foundations of the mosques, and justifies the further dispossession of eternal Palestinian rights extant from time immemorial. Should you find yourself in the Zionist entity, and wish to witness this hoax for yourself, you may do so at the Davidson Center, adjacent to the entrance to the so called “Wailing Wall.” I’ll show you a wailing wall you rotten Zionists.