Do The Write Thing at the 2009 General Assembly 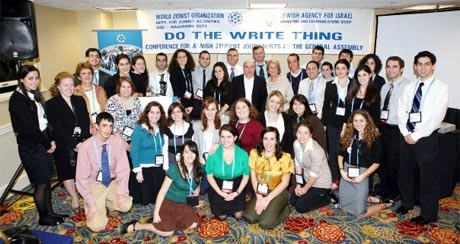 It has been a few weeks since the General Assembly for the Jewish Federations of North America, where I, along with other young Jewish journalists and public relation students, learned how to â€œDo the Write Thing.â€ This conference within the conference–sponsored by Hagshama–gave a selective group of students the opportunity to meet exclusively with speakers in order to learn how to be effective pro-Israel writers and advocates in the world of Jewish journalism.

Many may think right away that this pro-Israel conference held over three-days in Washington D.C. was bound to deliver a biased single-sided message to students, but this was far from the truth. The way to best describe the panel of speakers is by quoting Natan Sharansky, â€œJews are very opinionated peopleâ€¦every Jew cannot unite his or her all opinions in one, they have at least two opinions.â€

There were a variety of personalities at the conference, each with a unique opinion on the subject of Israel.

In the multiple encounters with Sharansky, he fervently spoke of the need to increase pro-Israel activism in college campuses in North America to fight against the growing anti-Israel sentiment.

Jacob Dallal, a former spokesperson for the Israeli Defense Force, stated his belief that part of the â€œIsraeli problemâ€ is its defensive attitude and lack of narrative.

Nathan Gutmann from Reshet Bet Radio and IBA TV, as well as a former Ha’aaretz reporter, reinforced the need for us as future journalists to portray the truth and reminded us that being pro-Israel does not mean setting aside any criticism of Israel, as Israelis themselves are critical of their own government.

To finish off we heard from Galia Albin, the â€œIsraeli Oprah,â€ who openly discussed her ideal narrative for Israel, one in which the world should see Israel in terms of cost and benefit.

Students also had the opportunity to meet other professionals of the American Jewish journalism world–Gary Rosenblatt, Leni Reiss, Jacob Berkman, Aharon Horowitz, and others–who offered advice and connections on how to start in the world of Jewish journalism and public relations.

â€œDo the Write Thingâ€ showed Israel from the inside, including pros and cons of the nation and its current political state. It gave students the opportunity to make their own conclusions, accompanied with good advice from experts on how to approach Jewish journalism.

So next year, if you are looking to expand your knowledge and gain a few connections to embark in the world of Jewish journalism â€œDo the Write Thing.â€