Hamas: “We Will Make Gaza into Hollywood 2” 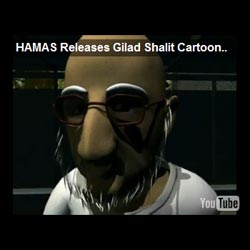 Just a reminder that Gilad Schalit has not been seen by even one Red Cross worker or anybody other than Hamas terrorists since his capture. We have seen a short film with him in it, but that’s it. The young man’s life is destroyed, he will never be the same.

Where is Goldstone? Why isn’t he paying more lip service to Palestinian war crimes?

(ck’s note: replaced original vid with one subtitled in English)