Nolite te bastardes carborundorum: Do not let the bastards grind you down, Margaret Atwood 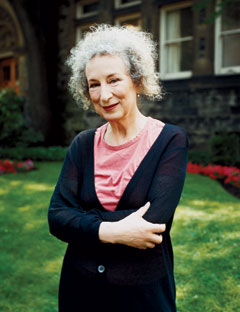 Margaret Atwood is a brilliant writer. Reading her work, there were countless times when I would stop just to reread a passage or two because the writing was so stunningly beautiful. My favorite work of hers is not one of her novels, but rather her early poetry. The Circle Game was a book I love/d. The title poem, The Circle Game, still holds up and hits me in many of the same places, although I understand it better now that I’m older, but there’s one poem in particular in that collection, Some Objects of Wood and Stone, that I still go back to read after all these years.

Atwood is now officially a ping pong ball, although to be entirely fair about it, one side is waiting for the ball to arrive on its side while the other has slammed pretty darn hard with its Boycott, Divestment and Sanctions racket.

Having been awarded the Dan David Award for her literary accomplishments, a prize that is given to those who have achieved excellence in their fields “who have struggled to recollect our past, to understand the present, and to plan for the future,” Atwood is supposed to visit Israel in May. The prize is awarded at Tel Aviv University.

By now you know where this is going. I won’t take you there, because I have no intention of playing ping pong. If you want to read a typical letter to Atwood, I’ve enclosed part of John Greyson’s, the film professor from York University who advocates boycotting student film festivals if they take place in Israel and international ones in Toronto if they show a slate of films commemorating 100 years of an incredible city. If that city is in Israel. Here’s part of his manipulative diatribe:

I write today as a fan, someone whose life was changed on reading A Handmaid’s Tale, someone who still treasures my rare edition of The Journals of Susanna Moodie. For decades, you’ve been an extraordinary role model for so many of us, embracing the role of artist as a figure of conscience. You’ve consistently spoken out against a host of injustices, even as you engaged with the complexities of each issue. In May, will you decline this prize, in recognition of the growing boycott movement which is trying to contribute to peace in the region? Will you at least speak out against the war crimes committed a year ago? Will you perhaps donate a portion to a writers group in Gaza? Will you at the very least acknowledge the complexities that this award, and this conflict, represent? Or will you remain silent, making us wonder: why on earth would Margaret Atwood of all people object to complexity?

A tough, astute woman, Atwood has made her decision. She is going.

However, the reason for this post is the extraordinary public letter she wrote to explain why she is going. Here it is in its entirety:

Since I accepted the Dan David Prize and it has been announced, I have received several letters from different groups asking me to reverse my acceptance and boycott this event. For some reason, Amitav Ghosh of India, with whom the prize is shared, does not appear to be a target of this campaign. He and I have been chosen to receive the Dan David Prize for our literary workâ€”work that is said to depict the twentieth century. In my case, women and the environment also feature. Here is the citation.

I sympathize with the very bad conditions the people of Gaza are living through due to the blockade, the military actions, and the Egyptian and Israeli walls. Everyone in the world hopes that the two sides involved will give up their inflexible positions and sit down at the negotiating table immediately and work out a settlement that would help the ordinary people who are suffering. The world wants to see fair play and humane behaviour, and it wants that more the longer the present situation continues and the worse the conditions become.

As soon as I said that, in an earlier letter, I got yelled at for saying there were two sides, but actually there are (or possibly more than two). See:

I certainly have no power to influence these events.

However, the Dan David Prize is a cultural item It is not, as has been erroneously stated, an â€œIsraeliâ€ prize from the State of Israel, nor is it a prize â€œfrom Tel Aviv University,â€ but one founded and funded by an individual and his foundation, just as the Griffin Prizes in Canada are. To boycott an individual simply because of the country he or she lives in would set a very dangerous precedent. And to boycott a discussion of literature such as the one proposed would be to take the view that literature is always and only some kind of tool of the nation that produces it — a view I strongly reject, just as I reject the view that any book written by a woman is produced by some homogeneous substance called â€œwomen.â€ Books are written by individuals. Novels are the closest we can come to experiencing human lives in particular places as they unfold in time and space, and lyric poems are the closest we can come to co-experiencing another human being’s feeling-thought.

Another dangerous precedent is the idea of a cultural boycott. Even those strongly endorsing a financial boycott, such as Artists For Peace, reject cultural boycotts, which they see as a form of censorship. (See their December 22 posting, in their Israel-Palestine file.) Indeed, such boycotts serve no good purpose if one of the hopes for the future is that peace and normal exchanges and even something resembling normal living conditions will be restored.

PEN International, an organization of which I am a Vice President, is in favour of continuing dialogue that crosses borders of all kinds. â€œInternational PEN, the world’s oldest human rights organization and the oldest international literary organization. International PEN was founded in 1921 to dispel national, ethnic, and racial hatreds and to promote understanding among all countries.â€ (See U.S. PEN’s recent New York Tariq Ramadan Cooper Union event, for which they were attacked by extremists from all sides.) Moderates who want to promote dialogue always get hammered twice as much, as they get stones thrown at them from several directions at once.

In this situation, threats to open discussion come from both sides of the wall: consider this report from IFEX.

I realize that I am caught in a propaganda war between two desperate sides in a tragic and unequal conflict. I also realize that, no matter what I do, some people are going to disagree with my decision and attack me for it. That being the case, I have chosen to visit, to speak with a variety of people, and â€“ as much as is possible — to see for myself, as I have done in other times and other countries many times before, including several behind the Iron Curtain and Iran and Afghanistan.

If I can go to the Occupied Territories, I will. After that, I will write my own â€œOpen Letterâ€ â€“ something that I would otherwise be unable to do. Groups opposing my going to Israel, and to the region, should bear that in mind.

In that letter, I am very likely to call attention to a hard truth about the whole region: it is extremely vulnerable to climate change. The Dead Sea is evaporating rapidly, and heat is increasing. Unless some immediate and shared thought and work is done soon, there will not be a Middle East to dispute about, because no one can live there anyway. See the exemplary work being done by Friends of the Earth Middle East, which brings together projects spanning Israel, Palestine, and Jordan.

These initiatives are examples of how people can live together and work together for desirable common ends. And how â€“ increasingly, around the world â€“ we will have to. Nature recognizes no national borders, and does not negotiate. If the world were a basketball, the biosphere would be a coat of varnish. Our ability to remain alive depends on that thin skin. At my age, I am devoting much of my increasingly limited energies to the cause of bio-viability â€“ the ability of life to continue living on this planet.

Finally, I believe that those behind the choice for the Dan David Prize acted awarely, and that they fully intend to hear something about colonialism, unequal power, and in my case the subjugation of women and the perils facing us because of environmental degradation. Otherwise, why would they have invited me?

I hope the Israelis understand that she will receive a full-court press from the Palestinians and their supporters when she visits them. The Israelis would be wise to drop their legendary incompetence at explaining the dilemma they’re in and ensure she gets somebody sympathetic and knowledgeable to tell the Israeli side of the story. Amos Oz strikes me as a natural ambassador, being a strong leftist and advocate for peace, while unashamed to express his support for Israel.

They might also want to relate some of the phenomenal advances they’ve made and are trying to make in the environmental arena. Considering they recycle 70% of their water (the country with the second most reuses 12% of its water) and that Israel may well yet become the first nation on earth to have a full infrastructure enabling electric vehicles, there’s an important story to tell there.

Most of all, I hope she walks away from there with a deeper understanding of the complexities of the situation, although she clearly already possesses a pretty good handle on the conflict.