Somebody please tell me whether this is an open death threat 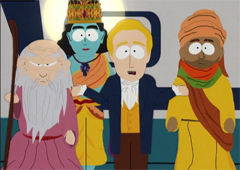 ck’s comment: Just wanted to add a little context. The latest episode of South Park featured a somewhat convoluted plot line that included Mohamed. This was Mohamed’s second appearance in South Park. The first time Mohammed appeared was in season 5 in 2001 in an episode called Super Best Friends. Since this was before the Mohamed Danish Cartoons controversy in 2005 (which led to world wide protests, rioting and over 100 deaths), no one seemed to care that Mohammed was depicted in a cartoon. 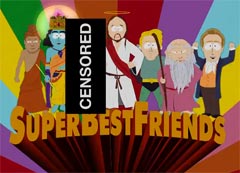 However, in the post Mohammed cartoon controversy world, the characters in the latest episode of South Park were concerned about how to depict Mohamed without starting riots. Initially, Mohamed’s image was merely blacked out. Then Mohamed was transported in a U-Haul and finally it was decided that it would be ok to put Mohamed in a Bear costume so that he could walk around but not be seen – in deference to the sensibilities of Muslim rioters. Now obviously the creators of South Park were making a statement about free speech and all that. The Super Best Friends are made up of prophets and deities of all religions (as well as a Super Hero, Sea Man – no idea why) but it is only the depiction of Mohamed that is likely to cause rioting and… death threats. Which brings us back to TM’s original post… was this video a death threat against Trey Parker and Matt Stone as well as all the other Islamic critics and dissidents listed in the video? Go to the comments section!