This kid from LA has balls 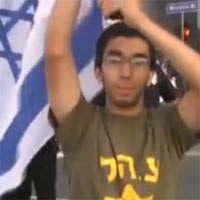 Bravo! Seriously. And he’s only 17. Also, pretty eloquent and principled considering his age.