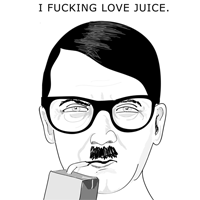 The Internet is retarded. Not intellectually challenged or learning disabled or whatever. It is flat out RETARDED and I mean that in the most politically incorrect way possible. How else do you explain catsthatlooklikehitler.com? Yes. It’s a site dedicated to photos of cats. Cats that look like Hitler. And now we have Hipster Hitler, an anachronistic cartoon that re-imagines Hitler as a pouty hipster, complete with ironic t-shirts (Mix Master Race, Death Camp for Cutie, You Make me Feel like Danzig etc.), an ironic bicycle and a constantly annoyed attitude.

It’s kind of creepy perhaps but frankly, anything that ridicules Hitler I figure is pretty good for the Jews. And for mankind. And so I allow myself to laugh at the retardation.