The Palestinians make it clear: No deal 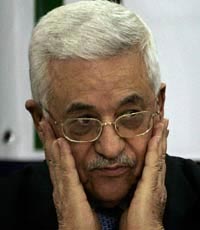 Palestinian Authority President Mahmoud Abbas said Friday that under no circumstances would the PA sign an agreement with Israel which required the recognition of Israel as a Jewish state or a land swap.

“The PA recognized Israel’s existence in 1993, and now Israel needs to recognize the Palestinian state in line with the 1967 borders,” Abbas said during a meeting…

He explains that he is referring to 1967 borders. Of course, there are no 1967 borders, he is referring to the 1949 armistice lines which the Arabs refused to accept as borders, apparently in the hope they would conquer more of Israel in the future. In 1967, however, after attacking Israel, Jordan lost the war and its hold over east Jerusalem and Judea and Samaria which they had named “West Bank.” Israel then annexed the eastern part of Jerusalem but not the West Bank.

About 80% of Israelis who live in towns in the West Bank/Judea and Samaria, live very close to the Green Line, which is the demarcation point of the 1949 armistice lines and what Abbas calls “1967 borders.” In the deals offered by Israel to the Palestinians over the past decade, they have offered 100% of Gaza and 95%-97% of Judea and Samaria. The idea is that these heavily populated Israeli neighborhoods and towns would be annexed to Israel. In exchange, Israel has offered the Palestinians land inside Israel which is contiguous with land they would control in their new Palestine.

The other element of “1967 borders” is, of course, eastern Jerusalem, which includes the holiest site for Jews, the Western Wall. Prior to 1967, under Jordanian control, no Jews were permitted to enter this area at all, Jews were not permitted to have citizenship or even live in these areas. Before 1948 when Jordan conquered this area, Jews were only permitted to be at the Western Wall based on restrictions established by Muslim authorities (and enforced by the British) which restricted the number of visitors drastically and did not permit things such as the blowing of the shofar – ram’s horn – which is a custom going back to the days of the Temple. Today, under Israeli rule, there are no such restrictions while Muslims and Christians also pray openly and freely in their respective holy places.

What Abbas is saying, in effect, is that this part of Jerusalem, including the Jewish Quarter which was razed by the Jordanians and rebuilt by the Israelis, must go to the Palestinians.

Now just to add one last bit of clarification. None of the area east of the “1967 borders” or west of the “1967 borders” was ever under Palestinian control; not under their sovereign control and not even under their figurative control. First the Ottomans controlled all of the province called Palestine as part of their empire, and then the British controlled it as part of their agreement to bring about the establishment of a “home for the Jewish people” as required by the League of Nations, predecessor to the UN, in 1922.

Of course, the Israelis have no intention of giving up the Western Wall or the Jewish Quarter in Jerusalem. In offers of peace made by Barak and Olmert, the former offered shared sovereignty over eastern Jerusalem and the latter offered the same but recommended an international protectorate to be “sovereign” in the Holy Basin where the key holy sites for Judaism, Christianity and Islam reside.

Abbas and his predecessor, Arafat, rejected those offers. There does not need to be any more evidence as to what their goals are and how ridiculous the “peace process” has become. If the Palestinians “recognize Israel” but not as the state of the Jewish nation, and refuse to give up their dream of gaining control of Judaism’s holiest site, then there isn’t much left to discuss.

These rejections by the Palestinians are not made in a vacuum. To understand their reasoning, one need only listen to some Fatah Central Committee (essentially the executive decision-making body of the parent movement of the Palestinian Authority) members:

Jamal Muhaisen, a member of the Fatah Central Committee, said that it was â€œimpossibleâ€ for the Palestinians to recognize Israel as a Jewish state.

â€œNo Palestinian could ever accept such a demand, no matter where he is and what job he holds,â€ he said. â€œThis recognition would scrap the right of return for the Palestinian refugees and endanger the status of the Palestinians living in the territories that were occupied in 1948.â€

Or listen to Hassan Khraisheh, deputy speaker of the Palestinian Legislative Council,

â€œBy saying he will recognize Israel as a Jewish state, Abed Rabbo has crossed all red lines,â€ Khraisheh said. â€œThese remarks harm the right of return and our people in the territories occupied in 1948.â€

These statements clarify why Palestinians won’t declare Israel a Jewish state. They still intend to bring to Israel all the descendants of those refugees who left in 1948, and together with the Israeli Arabs – to whom they refer as “Palestinians” and “our people” – create an “Israel” that is essentially another Arab, Muslim country. That country, would, of course, be joined to the new Palestine in Judea and Samaria. Needless to say, at that point, they would hope to join the two Palestines to the biggest section of original Palestine, Jordan, which has a majority of Palestinian inhabitants.

That’s a wonderful dream that has nothing to do with reality or peace.

The Palestinians are now making a move to take this to the UN Security Council to have the Council declare a Palestinian state on “1967 borders.” They appear to have tacit consent from the French and the Spanish, and possibly even from Obama. The UNSC’s resolutions are considered to be enforceable laws and therefore bear great import here. The Council would have to get around a previous resolution, 242, which would seem problematic, but anything is possible with the Obama administration, including abstention from a vote, which would enable the other members of the Council to do the Palestinians’ dirty work for them.

Israel has now began to negotiate with Hamas over Gilad Shalit. Presumably, this is a signal to the PA and Fatah that if they continue to play hardball in this way, then Israel will stop protecting them from Hamas as it has been doing for years and might even enable Hamas to win control of the Palestinian population in the West Bank/Judea and Samaria by giving them a “victory” over Israel in the release of 1000 prisoners for this one soldier.

Since the PA has now proven in its statements and claims that its goals are the same as those of Hamas, Israel may be reaching the point where it refuses to whitewash the PA’s and Fatah’s two-faced game where it continues to speak about peace in the most sophisticated diplomatic style but in reality seeks to undermine Israel’s legitimacy, drives the international boycott efforts against it and continues to speak of “peace” as an outcome where the self-determination of the Jewish people is nixed and another Arab, Muslim state is born. It may well be that at least with Hamas in control, the truth will be plain for all to see.

Here are previous essays about this topic:

The Palestinian plan to keep stalling is working to perfection

The Palestinians Think They are in the Endgame

The Palestinians Believe They Have Israel in a Corner

Ehud Olmert’s Insanely Generous Peace Offer/Palestinians Predict They Won’t Talk to Israelis with Obama in Office/a> with More Details by Olmert Himself.