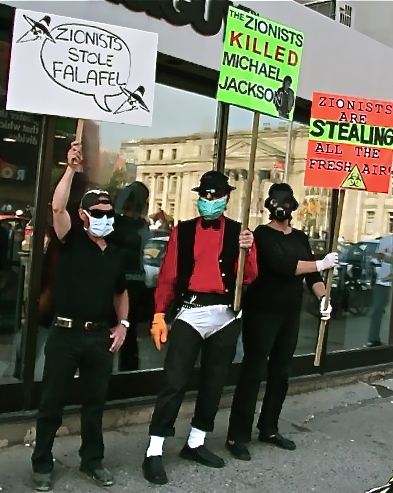 This is a response to the post written earlier today by Rae Abileah called Jewish Values vs. Israeli Policies. In that post, Abileah, a guest and first-time poster on Jewlicious, argues that she and others from Jewish Voices for Peace who disrupted Netanyahu’s speech were right to do so and their disruptions were also justified in their content.

Not only are these claims absolutely ridiculous, but they are posted under a banner proclaiming that these views are “Jewish values” which stand in stark contrast to “Israeli policies.” This is the kind of hyperbole which undermines any other claims they wish to make.

Here are the points I raised in objection to Abileah’s justification of the disruption and other activism driven by her group.

First of all, it’s amazing that you disrupted the speech in this way because I’m sure that you caused a severe disruption to whatever protective measures Netanyahu’s security detail was trying to put into effect. Sheer stupidity on your part.

Second, you were rude. There are ways to go about expressing viewpoints and this was extraordinarily rude.

Third, your organization is the founder of Muzzlewatch. Muzzlewatch is a blog that claims that voices criticizing Israel are under censorious attack. The irony of this claim is that when some of us went to Muzzlewatch to debate your group’s claims, they shut down all comments. Permanently. The fact that you would disrupt a speech with the claim that your claims can’t otherwise be heard is sheer hypocrisy.

Fourth, your banners are mistaken. What delegitimizes Israel are groups such as yours which serve as the vanguard of the numerous organizations that attack Israel regularly. What helps to delegitimize Israel is that many haters of Israel (as well as haters of Jews, just so we are perfectly clear on this point) use groups such as yours as shills, because you are Jewish, to enable their movements to avoid or to take cover behind you guys when they are justly criticized for singling Israel out in ways they don’t single out other nations that do far worse. In other words, you serve as a fig leaf for Israel’s enemies.

Fifth, your group and others like it have done more to damage the possibility of peace than has Hamas. What you have effectively done is give the Palestinians the confidence and belief that their waiting strategy is likely to succeed in defeating Israel over time. You have strengthened those who would refuse peace deals like Olmert’s and Barak’s.

Yet, here you are complaining that the occupation continues and that an embargo on Gaza â€“ a place which has launched thousands of rockets at Israel and is making great efforts to arm itself to the teeth â€“ should be lifted thus easing the way for more arming of those who have no problem shooting rockets at Israeli civilian centers in order to cause both terror and death.

And I could go on and on.

My point, however, is different.

If you had the true courage of your convictions, you would make every effort to convince the Palestinians to negotiate for peace and to close a deal. Polls in Israel for many years and three of the past four Israeli Prime Ministers have shown conclusively that Israel is ready for peace and ready to close a deal. The Palestinians, however, true to their history of the past 90 years and particularly the past 73 years during which they have had 5 (or 6 depending on how you count) opportunities to agree to divide the land and build their own state next to the Jewish one, have continued to refuse. While they refuse, they continue to attack Israel in public forums, the press, university campuses, NGO conferences, church conferences, etc. as an illegitimate and criminal state. This, despite the fact that in their society they have no democracy, no liberal values to speak of, no freedom of expression, effective rules that discriminate heavily against minorities such as homosexuals and Christians and a heavy propaganda push that educates their young toward war and non-settlement of the conflict despite nearly two decades of a peace process.

Yup, if you were really Jewish Voices for Peace, you would make every effort to make the Palestinians come to the table and forge a historic compromise. Instead, you seek to weaken Israel and strengthen those who would damage it.

ck has balls for letting you post on our site. What you represent are the forces that will bring Israel to future wars â€“ wars where young and middle aged Israeli men, fathers, brothers, sons – will have to give their lives and limbs to protect their homes and families.