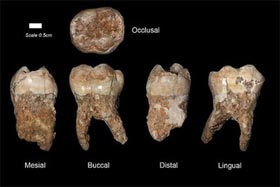 A team from Tel Aviv University’s Institute of Archaeology found teeth while digging in a cave that are believed to be the oldest human remains ever found. At 400,000 years old they are twice as old as any other known remains and suggest that human life began in Israel and not in Africa. Professor Avi Gopher (Yes. “Gopher”) said:

“It is accepted at the moment that the earliest Homo sapiens that we know is in east Africa and is 200,000 years old, or a little less. We don’t know of anywhere else where anyone claims to have an earlier Homo sapiens…”

Already, a homo sapien representative is petitioning the United Nations Human Rights Commission with demands that Israel respect all homo sapiens’ right of return and provide reparations for lost land. In a nod to Palestinian and Muslim claims over Israel, the representative asserted that this right of return did not apply to Jews who were colonialist usurpers, violators of homo sapien rights and descended from “monkeys and pigs.” In response to yet another claim of occupation, self-styled progressive secular Israelis are packing their bags and moving to a petting zoo in Berkley, California.