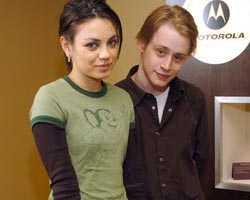 Is this some kind of epidemic?
I swear I have no idea what the hell is going on. In short order Scarlett Johansson and Ryan Reynolds (not a Jew) filed for divorce, then Natalie Portman announced that she was pregnant and engaged to Benjamin Millepied (not a Jew). After that Rachel Weisz left husband Darren Aronofsky (Jew. Duh.) and was seen canoodling with Daniel Craig (not a Jew). Now we get news that Mila Kunis has ended her relationship with long-time boyfriend, Home Alone star Macauly Culkin (not a Jew).

The Ukrainian born Jewish actress insisted that the split was amicable and that the two remain friends. Kunis starred in That 70s Show, is the voice of Meg Griffin on Family Guy. Kunis also recently received Oscar buzz for her co-starring performance in Black Swan with fellow Jewess Natalie Portman. The movie included a much talked about love scene between the two actresses. Both actresses have thematically similar films coming up next involving a physical relationship with a close friends. Kunis was cast alongside Justin Timberlake (SO not a Jew) in Friends with Benefits, and Portman appears with Ashton Kutcher (not really a Jew) in the troubled No Strings Attached.

What does all this mean? I haven’t a clue. But probably Peter Sarsgaard (not a Jew) should be really nice to Maggie Gyllenhaal. Oh and speaking of Gyllenhaal, her brother Jake broke up with Taylor Swift (not Jewish) allegedly because they moved together to Park Slope too soon. Something about too many baby strollers. Heh.