From the folks that brought you Yalla Ya Nasrallah we now have the Osama version, in Hebrew with English subtitles for those of you who don’t understand Hebrew so well:

I know that some have taken umbrage with the celebrations surrounding Osama bin Laden’s death. I know that I for one did not go out in public, wave a flag and holler with glee upon hearing the news. Some have asked how could people celebrate this death while reacting with disgust as Arabs celebrated in the streets upon hearing of the violent deaths of their enemies? I guess the difference here is that the joy expressed by the Arabs in question (certainly not all Arabs) occurred after the deaths of innocent civilians, from the victims of 9/11 to the members of the Fogel family. Osama on the other hand. well ’nuff said. 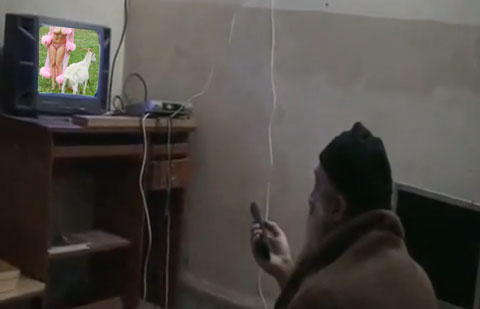 If this is a CIA information operation â€” and how could it not be? â€” it’s the greatest one of all time. In public, bin Laden is the pious, self-proclaimed vanguard of a violent Islamic uprising. Alone in his compound, he’s beating it like it owes him cash.

OK I am chuckling, but not in a giddy, bloodthirsty way.