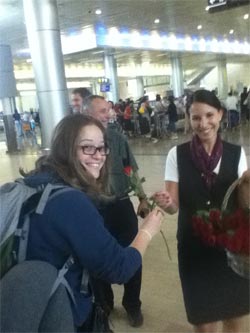 I spent the bulk of last week in Kiev at the 2nd annual Muslim Jewish Conference. I was initially concerned that the impending launch of the Gaza flotilla and how that would affect the interaction but as that fizzled out, it was never an issue. On Thursday I realized that I would be arriving back in Ben Gurion airport at the same time as the dreaded Flytilla – an international group of Palestinian activists who were going to descend upon Ben Gurion airport and, uhm… uh… I think in theory they were supposed to be expressing solidarity with the embattled people of Palestine. Maybe they were also going to be bringing them badly needed humanitarian aid from duty free too, I’m not really sure.

In any case, the government of Israel reacted the same way any government would when the proper functioning of its airports as conduits for international transportation were threatened with disruption. They circulated a list of 300 known activists to airports around the world and warned airline companies that if anyone on the list would be allowed to fly to Israel, they would be returned to their point of origin at the expense of the airline. As a result, the bulk of the activists did not make it to Ben Gurion. Some however managed to make it through and to date about 100 have been detained pending deportation. Only a handful made it through without getting arrested. As for me? My flight in on Friday was notable only in that my luggage made it through in record time, and a nice lady from the Airport Authority gave me and all the arriving passengers, a rose and a welcome smile.

The rose was a nice touch. Some Israeli pro-Palestinian activists were also at the airport, there to greet their comrades in front of the massive crowd of journalists, cameramen and protesters. The video above shows a couple who got detained while I was trying to get on my sherut back to Jerusalem. Once again, apologies for the crappy video quality… Please note the 5:1 journalist to protester ratio and the loud crowd. Some claimed that the people detained had been assaulted by the crowd but I saw none of that.

So? Was this good for the Jews? Like I said, the rose was a nice touch. Otherwise, one always hates to see the Police getting all up in people’s faces, but this is an airport. Try similar shenanigans in any other airport and see what happens. What is clear is that these actions are all about PR. Obviously none of these protesters posed an immediate security threat. Palestinian activists arrive in Israel on a regular basis and make it to the West Bank without incident. These activists were there to be disruptive and to create photo opportunities. Israel’s preemptive moves, preventing the bulk of the protesters from arriving was smart. Next we have to work on better imagery, less disruptive arrests. But whatever. I’m home. Yay!