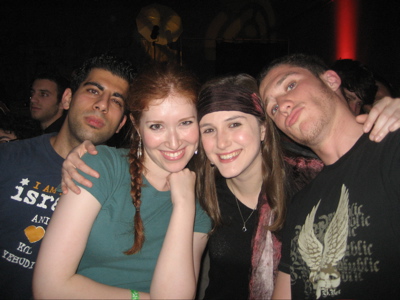 I’m going to put this out there because it needs to be said.

Over the past couple of years, enough people have hinted or said outright to people from Jewlicious that funding for programming hasn’t been forthcoming because Jewlicious is perceived to be a stealth kiruv movement.

I have been writing for Jewlicious since virtually its founding, have attended all of the Jewlicious Festivals except for one and am close friends with ck, founder of Jewlicious, for over a decade now. I also know Yonah and Rachel Bookstein personally and consider them friends.

I am a secular Jew who, while respecting our traditions, drives on shabbat, eats food that isn’t kosher and who recoils in disgust at kiruv organizations and their activities. I have seen families torn apart by kiruv organizations and have zero respect for them or their mission. Simply put, I would never be involved in any activity that involves kiruv or with people who have anything to do with kiruv.

I can report with complete confidence that I have never seen anything on this site or at any Jewlicious Festival that resembles kiruv. Nothing. Nada.

On the contrary, Jewlicious and Jewlicious Festivals embody a philosophy of openness and togetherness to all Jews from all streams. We debate the topic, sure, as we have for example the question of half-Jews and Christians who call themselves Jews for Jesus or Messianic Jews, but Jewlicious has enabled such discussions and did not shut out any voices.

What Jewlicious has done and is doing is admirable precisely because it looks beyond labels and streams and seeks to bring together people on the simple basis of their connection to the Jewish people. To remind those who see a black-hatted, bearded Jew and automatically assume that he will seek to indoctrinate a non-observant Jew, you need to give others the same benefit of the doubt you expect for yourselves and understand that it’s possible for an Orthodox and non-Orthodox Jew to interact without one trying to sway the other’s belief system. Bigotry is unbecoming regardless of who is practicing it and it should be noted that Jewlicious is special precisely because it is one of the few places where Jews of all streams come together and share experiences without consideration for whose religious philosophy or stream is the right one.

To conclude, I’d like to quote David Abitbol, who founded Jewlicious with the goal, as he told me when he recruited me to join, of creating a site for young Jews that is positive about Israel and about Jewish life in general. Period. He’s speaking as to the challenges Jewlicious faces in growing its programming – its highly effective, non-kiruv programming that brings young Jews of all denominations together and allows them to leave their joint experience feeling as part of a larger family of Jews and completely comfortable in their own Jewish religious philosophies.

Why are we not flush with cash? Well, after 7 years and countless successful programs (including this blog) many still see us as a sophisticated Orthodox Kiruv movement. Just as an aside, I’d like to add a hearty â€œfuck you!â€ to those ignoramuses that still think that because we include Orthodox Jews, we’re all about Kiruv. Next time you come to a Jewlicious Festival, join the Reform Minyan for services and stick your Orthodox kiruv where the sun don’t shine.

Don’t let the “fuck you” dissuade you from supporting the next Jewlicious festival or activity. Instead, let it serve as a wake-up call. Here is a group of people that have proven to be effective in reaching the young Jewish demographic and doing so in a way that resonates with them for years. Isn’t this what we’re all looking for in the Jewish community? Open your email and send a message to ck, David Abitbol, asking him how you can help and cut it out already with the silly accusations and excuses for not supporting a worthy organization.

(This post was written of my own volition and not by anybody’s request or encouragement).